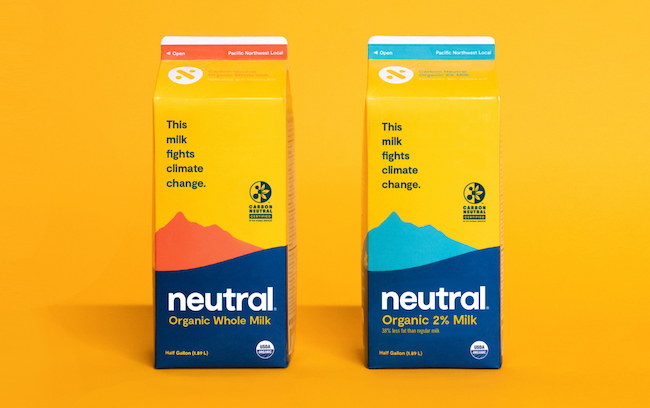 Neutral Foods Could Change Everything for Organic

Mark Cuban, an early backer of Neutral Foods, calls the company a “game-changer.”

Yet, one could easily speculate that his effusive praise of Neutral Foods doesn’t fully encapsulate why this brand’s success is so critical to the organic community.

This is because Bill Gates is a significant investor in the company, and if Neutral Foods can empirically demonstrate that small organic farms are an essential part of the equation when it comes to a warming planet, it may fully open his eyes to the fact that organic — and not GMOs — is the path moving forward.

Until this point, he has not been convinced.

As the first carbon neutral foods company in the U.S., Neutral Foods is on a mission to radically reduce the carbon footprint of agriculture.

“We did a lot of work looking at the $860 billion grocery market, and the vast majority of ag-related emissions is from animal proteins and what goes into feeding the animals,” said CEO Marcus Lovell Smith. “That is why we decided to focus on dairy, and in 2023, we’ll be moving into beef.”

While numerous companies have committed to being carbon neutral by a future date, Neutral Foods has a few distinct advantages.

First, the entire business was designed to be carbon neutral from Day 1, with all of its organic milk and butter products Carbon Neutral Certified by SCS Global Services. Second, its brand name and packaging fully leverage this carbon neutral message to consumers. They are inseparable.

Neutral Foods uses models to calculate the greenhouse gas emissions from its current operations and the climate benefit of each potential farming project to prioritize investments. For every project that Neutral invests in, the company conducts long-term effectiveness monitoring to quantify the reduction or removal of greenhouse gas emissions the project has delivered. Whatever climate impact the company cannot eliminate through its portfolio of on-farm greenhouse gas reduction or removal projects, it purchases carbon credits to offset the difference.

When measuring its own carbon footprint, Neutral Foods factors in every single direct and indirect emission, also known as Scope 1, Scope 2 and Scope 3 emissions.

That means accounting for each step along the way — the carbon impact of the cows, their belching, their feed and how the manure is managed; fuel usage to transport feed to the farm, milk to the processing facility and cartons to the distributor and retailer; all activities at the processor, distributor and retailer; and ending with the consumer impact, finishing at the landfill where the carton ends up.

The company works in a very collaborative manner with small organic dairy farmers — all of whom have between 50 and 250 cows — to figure out which carbon mitigation investment would be best for them. The projects could be anything from changing how the forage is being produced, investing in technology to reduce manure-related emissions, implementing strategies to keep compost decomposing anaerobically or advising on intercropping with a rye grass to keep weeds down.

Neutral Foods has found that there are four main barriers that prevent farmers from embracing these practices — financial access; a lack of confidence or expertise to re-risk the solutions; project management and oversight; and the complexity of monitoring and measuring whether there is a real climate benefit.

Operating in Oregon and Washington, the company currently has ten projects in the ground, functioning and reducing greenhouse gases, with another 30 projects in various stages of development.

Given that Neutral Foods is flush with cash, having raised a $4M seed round in 2021 and a $12M Series A a few months ago, the obvious question for organic advocates is whether it will expand to the Northeast and provide badly needed support to the small organic dairy farmers whose contracts were cut by Danone and Maple Hill.

“I would love to do some projects next year in New England,” put forth Marcus Lovell Smith. “This is about scale, and I would like to us to be all over the country. If we sell a small amount of elegant milk, that is nice, but it means we haven’t done our job.”

EARLY SUCCESS BUT DATA IS CRITICAL

Since launching last year, signs of early success in the marketplace are clear.

It has achieved nationwide distribution with Whole Food Market and Sprouts, and is in more than 2,000 doors. Yet, just like any other organic food company, Neutral Foods must prove to its investors that its model is a viable and profitable one.

However, its data around decarbonization strategies, of which everything is third-party certified from external auditors such as the World Resources Institute, is absolutely critical — for both the company and our industry.

Far too many people have been misled into believing the false narrative pushed by the GMO industry that organic provides vastly inferior yields and is actually worse for the environment.

Yet, what must terrify ag-biotech executives now is having to account for Scope 3 emissions; meaning, identifying the carbon footprint of all of the petroleum-based pesticides that are sprayed on GMO crops. When they are forced to do so, the yield argument, which the GMO industry has hidden behind for decades, will completely fall apart.

That is exactly the reason why we are seeing massive pushback against Scope 3 emissions disclosure.

And it is exactly the reason, among others, why we wrote that mandatory ESG reporting standards will be the most important development ever for organic.

Neutral Foods being profitable and having third-party certified confirmation that its decarbonization strategies are working will be essential to help change the mind of the most influential billionaire in the world when it comes to agriculture.

As I told CEO Marcus Lovell Smith at Expo East in Philadelphia a few months ago, “You have to get Bill Gates to see the light.”

And the best shot we have to convince him is with the data.

* On December 5th, Gero Leson, vice president of special operations at Dr. Bronner’s, will be hosting a seminar “How to Build Fair and Sustainable Supply Chains for Agricultural Products.”

* Terviva has partnered with Ciranda to distribute Ponova oil, a non-GMO and soon-to-be organic oil that has never been commercially available before for food production.

* Jim Riddle, former chair of the National Organic Standards Board, on the horrendous hydroponics ruling and what we can do about it.

* The first recyclable restaurant in Sweden has kelp chairs. 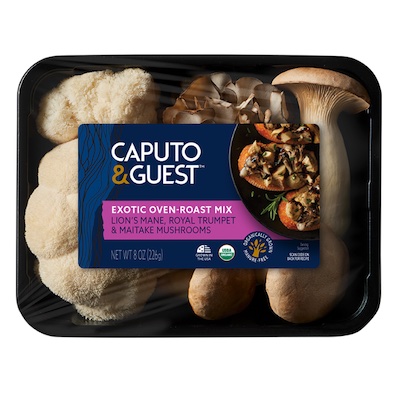 The new organic mushrooms and chefs' blends from Caputo & Guest are all grown and packaged at the company's operation in Pennyslvania, and instead of using livestock manure compost to grow its mushrooms, Caputo & Guest utilizes a proprietary blend of upcycled oak, poplar sawdust and grains. Mushroom varieties include royal trumpet, golden oyster, lion's mane, pearl oyster and maitake. 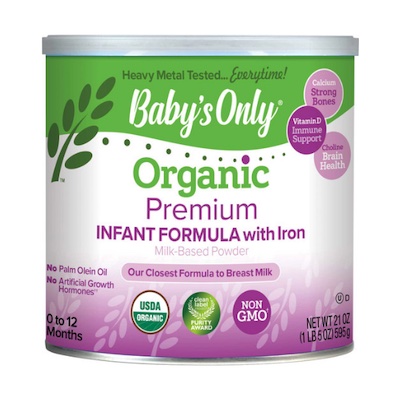 Baby's Only Premium Infant Formula from Nature's One

From Nature's One, Baby's Only Organic Premium Infant Formula is the first clinically-fed infant formula to study human growth and development using a certified organic formulation. All ingredients are tested for heavy metals and pathogenic contaminants, including cronobacter and salmonella, and it does not use ingredients exposed to neurotoxic chemicals, such as ingredients like non-organic, algae-based DHA. 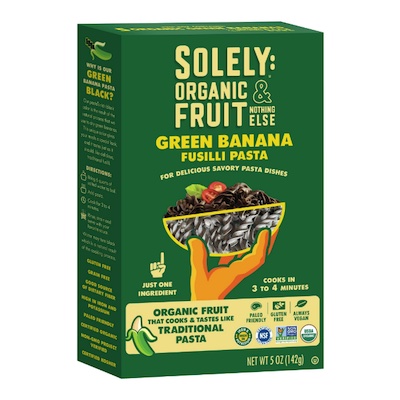 Solely has unveiled a first-of-its-kind, pasta alternative to the market -- Organic Green Banana Fusilli Pasta. Made from just one ingredient, the company uses its patented cold-pressing process to transform the green bananas into a traditional fusilli shape. Exclusively available nationwide at Whole Foods Market. 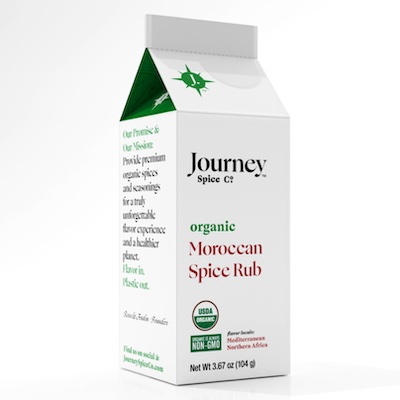 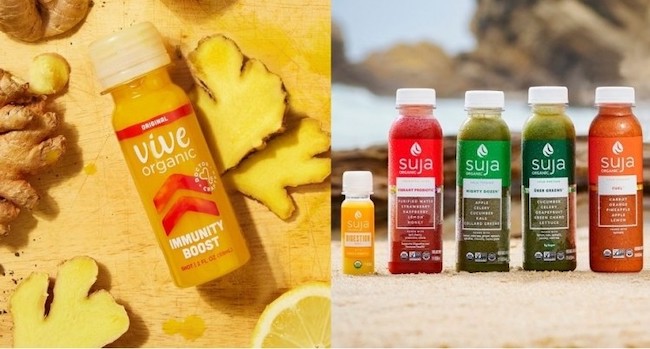 One of the smartest acquisitions I have seen in the beverage space.

For the First Time in a Decade, UK Organic Food Sales are Down

According to new research by Nielsen, after ten years of steady growth, UK organic food sales have fallen by 2.1%.

The manufacturer of medicinal herb teas has sold a minority stake in the company to Grounded Capital.

The USDA announced that it is establishing cooperative agreements in six regions across the U.S. for the Organic Transition Initiative, Transition to Organic Partnership Program. 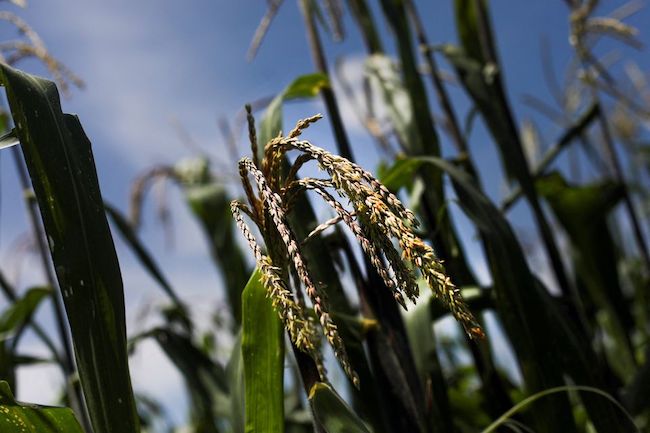 By Cassandra Garrison and Adriana Barrera

Fortunately, Mexico does not appear to be succumbing to pressure from U.S. trade officials nor the GMO industry. Very positive development.

Indian Government Restricts Use of Glyphosate

In a massive blow to agrichemical lobbyists, the Indian government has restricted the use of glyphosate-based herbicides due to the risks to human and animal health.

OrganicEye has the full recap of Day 1, Day 2 and Day 3 at last week's National Organic Standards Board meeting.

Produce Marketers Weigh the Value of Certifications Beyond Organic

For some marketers of organic produce, certification under USDA organic standards is the starting point. For others, it is the ending point. 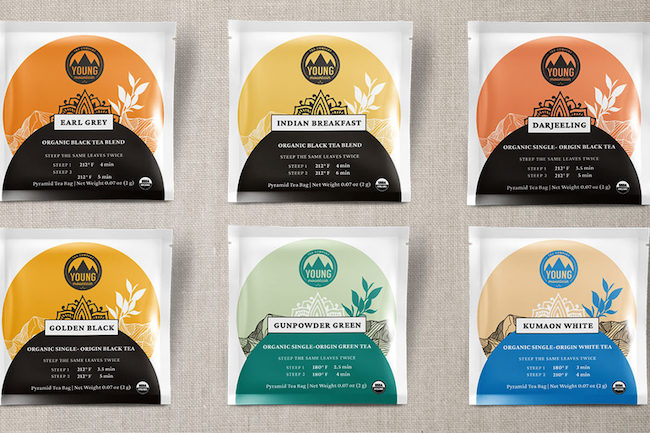 The company has partnered with Himalayan organic tea farmers in the village of Champawat in Northern India to launch the region’s first farmer-owned tea factory.

Food Prices Soar, and So Do Companies’ Profits

By Isabella Simonetti and Julie Creswell

Some companies and restaurants have continued to raise prices on consumers even after their own inflation-related costs have been covered. 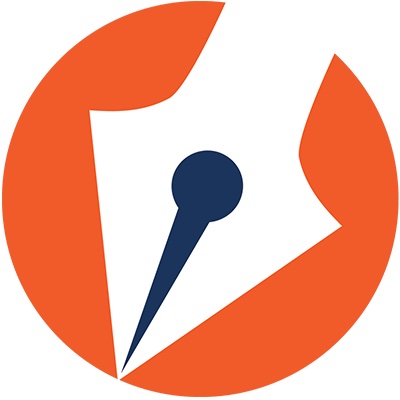 How PFAS Chemicals Got into Our Soils and Food Systems

Risks from ‘forever chemicals’ have ended a half-century of spreading sludge onto Maine farmland and raised unanswered questions about the contamination of foods.

* On December 5th, Gero Leson, vice president of special operations at Dr. Bronner’s, will be hosting a seminar “How to Build Fair and Sustainable Supply Chains for Agricultural Products.”

* Terviva has partnered with Ciranda to distribute Ponova oil, a non-GMO and soon-to-be organic oil that has never been commercially available before for food production.

* Jim Riddle, former chair of the National Organic Standards Board, on the horrendous hydroponics ruling and what we can do about it.

* The first recyclable restaurant in Sweden has kelp chairs.