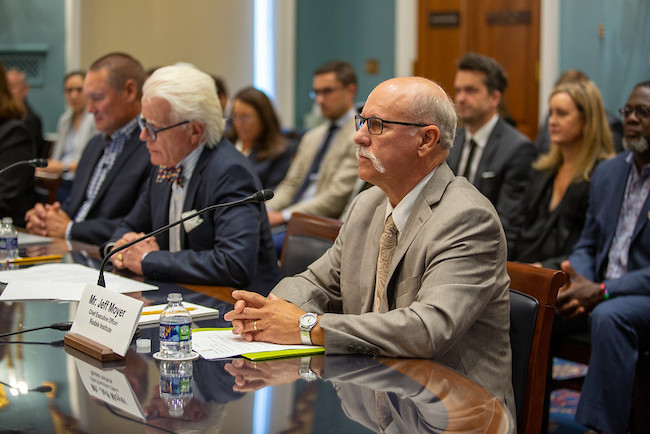 At a Congressional Hearing in Washington, Regenerative Organic Took Center Stage and Made a Very Powerful Impression

On Wednesday, September 14th, 2022, the U.S. House Agriculture Committee held a hearing called “Soil Health Practices and Programs that Support Regenerative Agriculture,”  and it was the kind of visibility and attention that regenerative organic advocates sought for many years.

Simultaneously, the world also witnessed how some politicians in this country are in complete denial about the harmful impact that GMOs and pesticides have on soil health.

Like it or not, conventional and GMO agriculture is to blame for our dangerously poor soil quality, as organic farming accounts for less than 1% of the total acreage in the U.S. Yet, numerous politicians refuse to acknowledge this, opting to attack organic instead.

The Congressional hearing was intended to gather information about different ways to improve soil health, all with the goal of incorporating them into the 2023 Farm Bill.

Here are my 5 key takeaways from the hearing.

1) HISTORIC DAY FOR ORGANIC  The fact that regenerative organic was able to make its case directly to the House Agriculture Committee was an unprecedented event in the modern age of our industry. Far too often, valuable information about organic never makes it to these politicians, but that is no longer the case.

“The full committee having a hearing on soil health, and demonstrating that organic and regenerative organic are taking a leadership role in all of this, was incredible,” said Rodale’s Jeff Moyer.

“We first met with the Ag Committee Chair, Rep. David Scott, at our event in Georgia a few months ago, and we explained to him that regenerative organic techniques, such as cover crops and roller crimpers, can be implemented at scale and will vastly improve our nation’s soil health. Farmers do not have to be organic, but they can utilize these techniques, and our country can minimize our dependence on Russia and foreign sources for our agricultural needs. Chairman Scott told us ‘We need to have you testify in D.C., so it gets the attention that it deserves.’ He made that happen.”

It was also extremely powerful when Indiana farmer Rick Clark shared with the committee how switching from chemical agriculture to regenerative organic methods helped save his farm and livelihood. 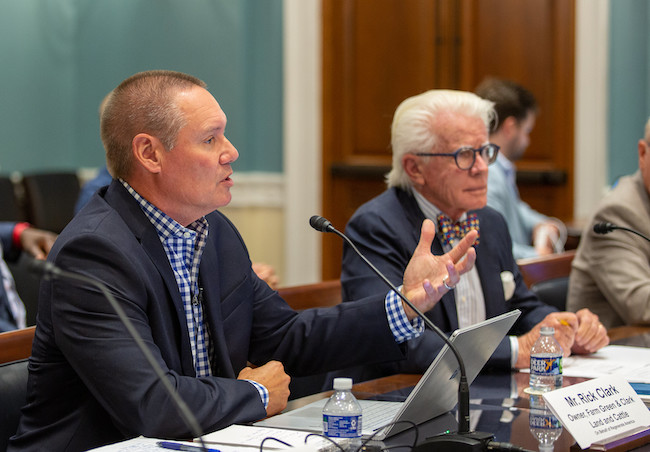 2) TILLAGE IN ORGANIC WAS DELIBERATELY EMPHASIZED  This was an enormous day for our industry, but make no mistake about it. The pro-GMO politicians on the committee and the lone pro-GMO person testifying, Dr. Rebecca Larsen, were in full attack mode against organic.

One way they did it was by saying that organic is able to avoid toxic chemicals through heavy tillage, and that this excessive tillage is incredibly harmful to the soil.

Representing the GMO sugar beet industry, Rebecca Larsen went on to say that “soil analysis across all of our farms show that the depth, breadth, diversity and soil function has not been affected by the application of glyphosate” and “that tillage itself is far more detrimental to soil health and the soil microbiome than chemical applications.”

First, it is incredulous that she could assert that tillage is worse than glyphosate, a cancer-causing chemical that destroys the soil’s microbiome.

Second, while excess tillage is harmful to the soil, tillage, when done correctly and used in conjunction with green manuring, actually improves soil health. According to Andrew McGuire at Washington State University, this approach results in an enlarged soil microbe community, and it produces more stable aggregates and better soil structure for overall increased soil function.

So, to make a blanket statement about tillage, as she did, is completely misleading.

3) REFUSAL TO ACKNOWLEDGE REALITY  The only reason that this hearing was held is because the soil health of this country is so poor.

Yet, after listening to some of the politicians on the committee and GMO proponent Rebecca Larsen, one might think that there is no issue at all with our country’s soil health and that organic is the problem. There seemed to be a complete and total disconnect from reality.

“Something must be done if we are going to prevent a food shortage. That’s how important this hearing is,” he said in his opening remarks,

4) ANTI-ORGANIC TALKING POINTS ON FULL DISPLAY, INCLUDING SRI LANKA  The claim “organic has lower yields” was often repeated, even though that has been proven otherwise by Rodale’s 40-year, side-by-side Farming Systems Trial, a report from the Union of Concerned Scientists, and a study from the University of Michigan, among others.

Rebecca Larson went on to say in peer-reviewed literature, “there isn’t any evidence that the food produced through organic farming methods is more nutritious, safer or healthier for people to consume.”

But a new talking point emerged at the committee hearing — Sri Lanka.

Because the country was completely mismanaged and broke, also exacerbated by the pandemic and war in Ukraine, the government had no money to import synthetic fertilizer and switched to 100% organic — without any real warning or significant resources for its farmers.

No one in the organic industry would ever suggest that the U.S. follow this move. It must be done gradually and with the proper training and resources, neither of which Sri Lanka did.

Nevertheless, pro-GMO committee members jumped all over this and insinuated that any significant transition to organic would result in a Sri Lanka-like disaster. A harmful, misleading and ill-informed soundbite.

(Here is an excellent recap of what really happened in Sri Lanka.)

5) TREMENDOUS PRAISE FOR KISS THE GROUND  In his opening remarks, Chairman Scott went out of his way to say that the influential Netflix movie Kiss the Ground was “extraordinary” and that it “opened my eyes to much of what I was only dimly aware.” A short clip of the documentary was also played at the hearing.

“It felt great to hear that both the film and our organization have had such an effect on so many people, including members of Congress, such as the Chairman of the House Agriculture Committee,” said Finian Makepeace, co-founder of Kiss the Ground. “It’s also a reminder that being an advocate for what you believe in can have a real impact when you work within a growing movement. Anyone can be an important ally for this work and can help change the world.” 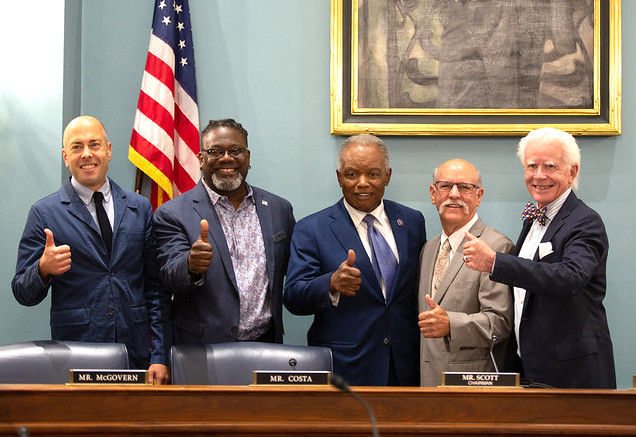 Overall, it was a phenomenal and historic day for the regenerative organic movement, and none of this would have been possible were it not for Chairman David Scott.

* Yvon Chouinard — you are a hero to all of us, and your bombshell announcement has changed the game for American business.

* After seven years of leading Rodale Institute to unprecedented heights, Jeff Moyer is resigning as CEO, effective April 2023. The organization has never been in better shape.

* Organizers of Øya, the world’s greenest music festival, explain how it’s done.

* Miyoko’s Foodie Truck Tour 2022 is popping up in select cities in California, Arizona and Texas.

* Sakara Life co-founder Danielle DuBoise on how to incorporate Energy Effervescents into your routine.

* A new documentary, Children of the Vine, exposes the horrors of RoundUp. Here’s the trailer.

* Are there PFAS chemicals in your dental floss?

* Be aware. The hydroponic lobbyists have a new front group — the Organic Produce Association. 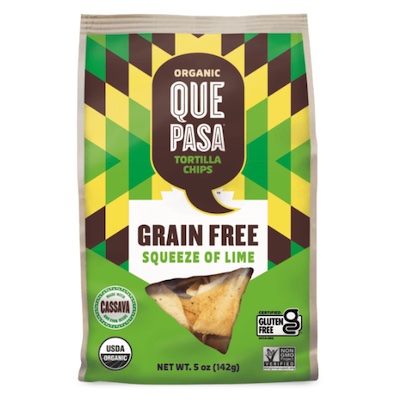 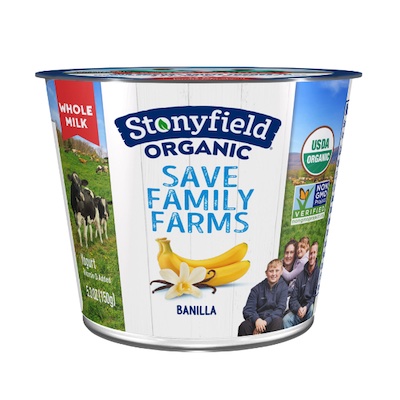 Banilla (banana + vanilla) has always been a fan favorite flavor in quart size at Stonyfield Organic, and now the brand is introducing Banilla 5.3 oz single serve cups. By purchasing Banilla cups (and any other Stonyfield Organic products), consumers are helping to save organic family farms, and the company is donating $100,000 to the Northeast Organic Family Farm Partnership to help at-risk farmers find new customers. 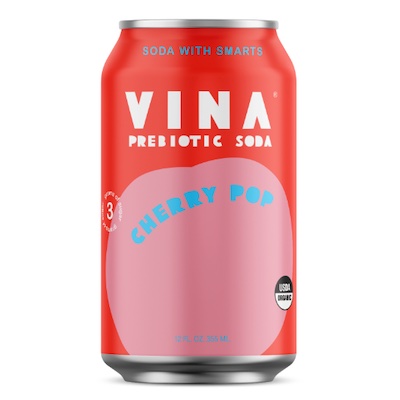 VINA, a line of organic prebiotic soda made with an essential blend of trace minerals and plant fiber, has reformulated. It removed stevia and replaced it with an erythritol/cane sugar blend. The five flavors -- Ginger Fizz, Cherry Pop, Lime Lemon, Grapefruit and Pomegranate -- all contain 5g of sugar or less. 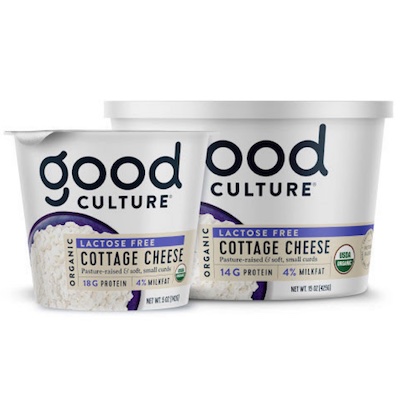 New from Good Culture is its Organic, Lactose Free Cottage Cheese. Made with just five simple ingredients, including probiotic cultures and pasture-raised milk sourced from small family farms, it boasts 14g grams of protein per ½ cup serving -- without the lactose. 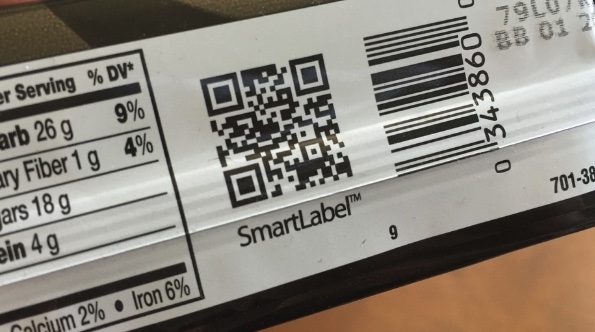 "This should be a warning to the industrial food sector that avoiding clear on-packaging labeling by using QR codes alone will not pass legal scrutiny," said Andrew Kimbrell, executive director of the Center for Food Safety.

In a round led by HumanCo and Manna Tree, True Food Kitchen will use the proceeds to open a fast-casual brand, something that its customers have been asking for, said CEO Christine Barone.

A scan of the QR code allows access to a range of information about the product lifecycle, including its origin, date of harvest, any analysis results, obtained certificates and the path it has traveled.

Organic Gets Significant Funding in USDA's $2.5B Climate-Smart Commodities Program

Some of the lead recipients include: $55M to the Pennsylvania Association for Sustainable Agriculture to help small and underserved farmers; $35M to Wolfe's Neck Farm to catalyze transition incentives; $25M to the Organic Valley Carbon Insetting Program to help build a multi-stakeholder path to produce and market climate-smart commodities; $25M to Rodale Institute to quantify the reduction of GHG emissions and increase carbon sequestration; and $20M to Maple Hill Creamery to grow the supply and market for climate-smart, grass-fed organic dairy.

Center for Food Safety's Bill Freese gives his take on what this all means. 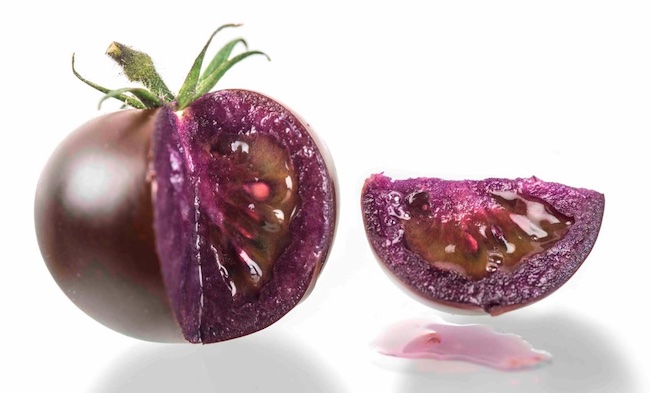 Next up is USDA approval and commercialization in 2023. A very troubling development.

Federal Agencies are Not Enforcing Pesticide Rules That Protect Farmworkers

The government's unwillingness to enforce the rules is severely damaging organic and jeopardizing the health of our valuable farmworkers.

With Ugandan Farmers Unable to Afford Synthetic Fertilizer, They Move Towards Organic

The war in Ukraine has forced farmers in Uganda to utilize an unlikely resource.

* Yvon Chouinard — you are a hero to all of us, and your bombshell announcement has changed the game for American business.

* After seven years of leading Rodale Institute to unprecedented heights, Jeff Moyer is resigning as CEO, effective April 2023. The organization has never been in better shape.

* Organizers of Øya, the world’s greenest music festival, explain how it’s done.

* Miyoko’s Foodie Truck Tour 2022 is popping up in select cities in California, Arizona and Texas.

* Sakara Life co-founder Danielle DuBoise on how to incorporate Energy Effervescents into your routine.

* A new documentary, Children of the Vine, exposes the horrors of RoundUp. Here’s the trailer.

* Are there PFAS chemicals in your dental floss?

* Be aware. The hydroponic lobbyists have a new front group — the Organic Produce Association.