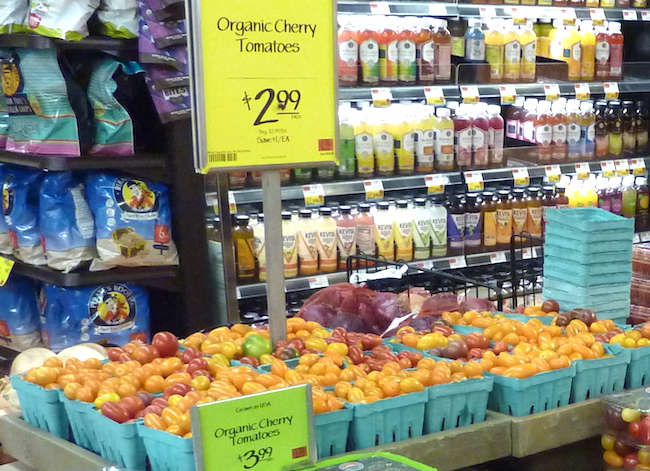 When it Comes to How Organic Produce is Grown, Consumers Must Demand Much Greater Transparency

Because of the way our industry is regulated, it is difficult, if not nearly impossible, to tell which organic fruits and vegetables are grown in the soil and which ones are grown hydroponically.

Yet, why should organic consumers care?

Hydroponics violates Section 6513 b-1 of the Organic Foods Production Act of 1990, which states that farmers must have a management plan that fosters soil fertility. Growing tomatoes in a bucket of water has nothing to do with fostering soil fertility.

And with the USDA declaring that hydroponics is legal in organic, soil-based farmers must compete in the marketplace at a severe financial and operating disadvantage. Hydroponics is much easier to scale and is more profitable than growing plants in the ground.

Lastly, liquid nutrients fed to hydroponic plants could never be a sufficient substitute for the microbial ecosystem that feeds soil-based plants.

Concerned industry players have not been sitting by idly.

Two recently created add-on labels — Real Organic Project and Regenerative Organic Certified — both prohibit hydroponics, and the Center for Food Safety filed a lawsuit against the USDA for allowing this growing method.

With both of the add-on labels still in very early stages and the lawsuit having yet to be resolved, how can consumers identify and purchase soil-grown organic produce?

To find out, we visited six national and regional supermarkets in the Boston area last week — Whole Foods Market in Brookline, Costco in Everett, Target in Everett, Walmart Supercenter in Saugus, Stop & Shop in Saugus, and Wegmans in Medford — and looked to see how their organic leafy greens, organic berries and organic tomatoes were labeled, both on the package and on the companies’ websites.

Here are the products we found:

Here is the information we found:

We visited each brand’s website, and almost all of them did not explicitly say how their produce was grown, although many had pictures of outdoor farms and some referenced the importance of the soil.

A few of the brands did address their growing practices, and at the bottom are screenshots from their websites.

– Long Wind Farm says “our tomatoes are certified organic and grown in nutrient-rich soil inside a greenhouse.”

Lady Moon Farms also calls out the problem of hydroponics and container growing systems, and encourages consumers to “ask your produce manager if the organic produce you’re buying is hydroponic.”

(A container growing system most commonly contains coconut coir or a similar ‘inert’ medium in its container. The vast preponderance of plant nutrients comes from a water-based fertilizer solution. According to Mark Kastel of OrganicEye, hydroponic operators started using the term “container growing system” when “hydroponics” became too controversial and was seen as potentially illegal.)

– Driscoll’s, which dominates the organic berry market and is believed by many industry players to be growing its organic fruits hydroponically, says that it “does not grow hydroponic, aquaponic or aeroponic crops” and that “hydroponics and container production are two very distinct and different growing systems.”

This last statement contradicts the assertion made by Lady Moon Farms, which says “container growing is the same as hydroponic growing as all nutrition comes through a constant IV drip to the plant.”

SHOULD IT BE THIS HARD?

For organic farms and brands that do not disclose exactly how their fruits and vegetables are grown — in the soil, hydroponically, aeroponically, aquaponically or via a container growing system — are they violating organic rules?

Absolutely not. They are under no legal obligation to do so.

However, there is a segment of the organic industry, including consumer advocacy groups and farming organizations, that believes soil-less systems are illegal and should not be part of organic.

Similarly, a growing number of organic consumers want to know how their produce is grown, either in the soil or not in the soil — even if this disclosure is not required by the USDA.

Francis Thicke, an organic dairy farmer in Iowa, knows this situation as well as anyone, having served on the National Organic Standards Board (NOSB) and a recipient of all of the hydroponic lobbying.

“We have a rapidly growing percentage of the organic fruits and vegetables on grocery store shelves being produced hydroponically, without soil, and mostly in huge industrial-scale facilities. And we have a hydroponics industry that has deceptively renamed ‘hydroponic’ production — even with 100% liquid feeding — as ‘container’ production. With their clever deception, they have been able to bamboozle even the majority of the NOSB members into complicity with their goal of taking over the organic fruit and vegetable market with their hydroponic products,” he said in his 2017 farewell address before his 5-year tenure as a member of the NOSB came to a conclusion.

Figuring out whether an organic tomato is grown in the soil should not be this hard.

The time has come for organic consumers to start demanding full and easy disclosure from organic brands, farmers and retailers. 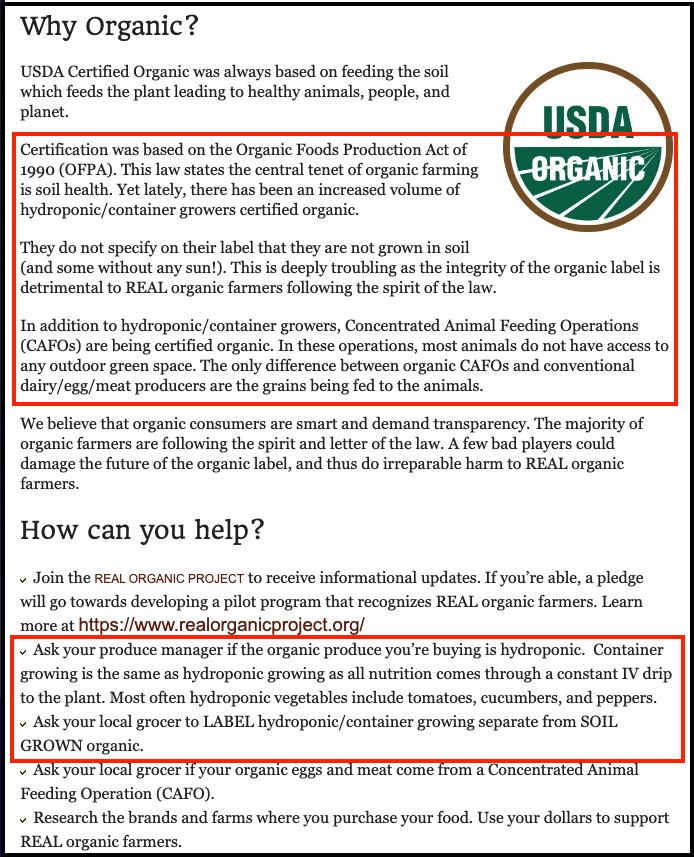 This was Part II of our two-part series on hydroponics. In our Part I of the series, we wrote about the new hydroponic certification called Clean Hydroponic Produce. 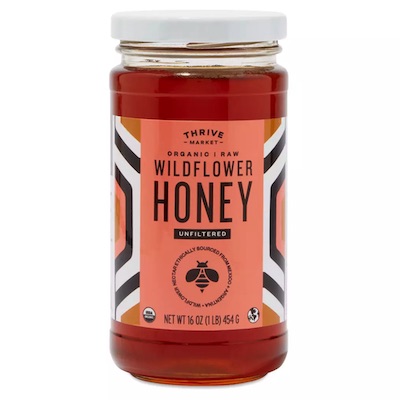 Ethically sourced from the hive and made from nectar collected from wildflower fields spanning Mexico and Argentina, the organic raw wildflower honey from Thrive Market is never pasteurized or filtered. It has a golden hue, silky texture and a bright citrusy flavor.

Dairy-Free Functional Smoothies from Once Upon a Farm

Once Upon a Farm has unveiled a line of organic functional smoothies and they come in three flavors -- Immunity: Cherry, Strength: Apple & Greens, and Balance: Mango & Orange. Dairy-free, cold-pressed and containing no added sugar, these smoothies are available at Whole Foods Market nationwide. 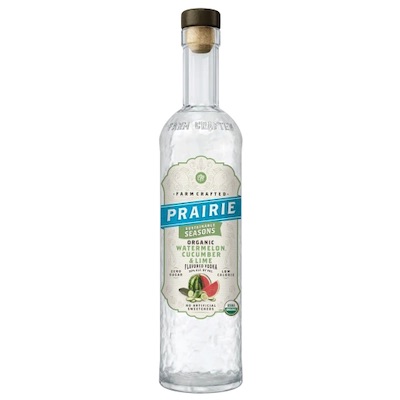 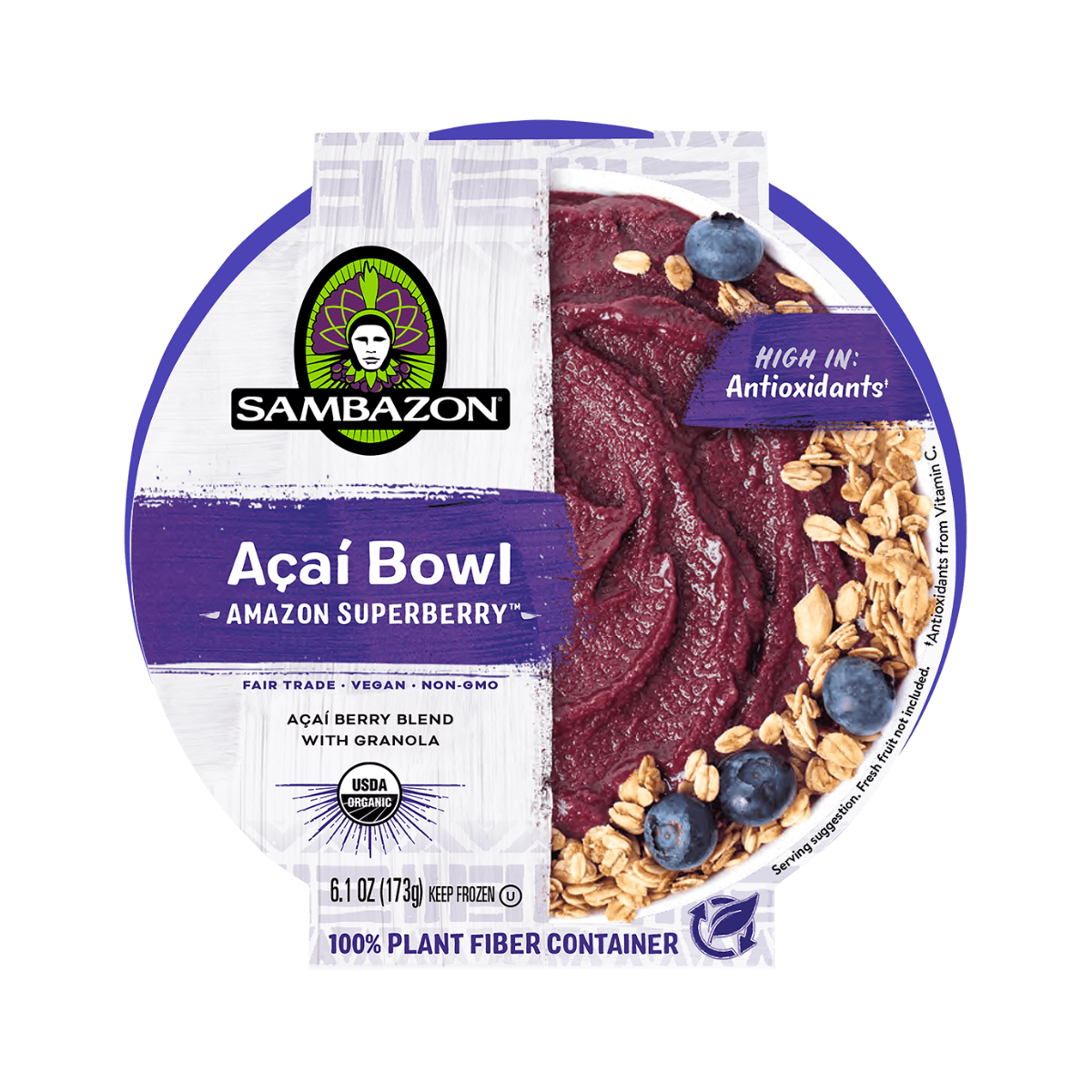 Sambazon has introduced a line of ready-to-eat, organic açaí bowls and they come in three flavors -- Amazon Superberry, Berry Bliss and Peanut Butter Power. The bowls are served in 100% plant-fiber packaging, which is completely recyclable and compostable. Available at retailers nationwide. 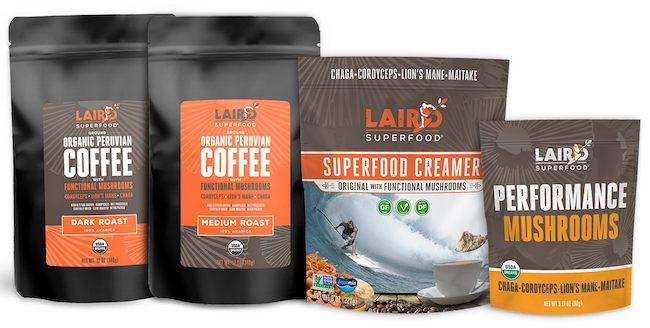 Laird Superfood's Impending IPO will be a Huge Litmus Test

Everyone in the organic industry will be watching this one. The company's first 6 months of revenue for 2020 was $11.1M with a $5M net loss.

39 members of the House of Representatives sent a letter to the USDA’s Farm Service Agency to urge the restoration of funding for the Organic Certification Cost Share program.

Investigative organization OrganicEye has just released a report on CBD that will help guide shoppers in choosing the safest, most authentic organic products.

To minimize your risk of pesticides, Consumer Reports has just released ratings on organic and non-organic fruits and vegetables. 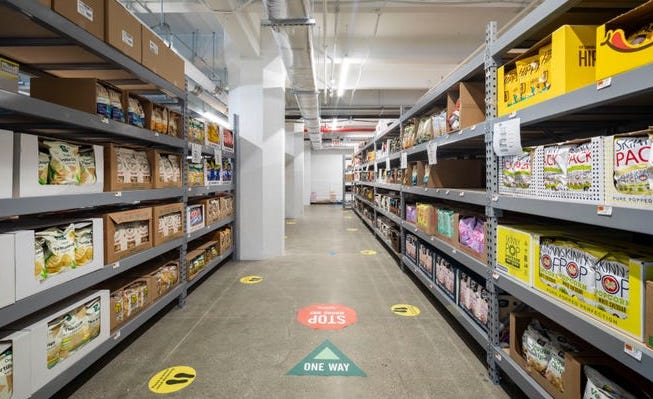 7 Ways the Pandemic Has Changed How We Shop for Food

For organic brands, SKU rationalization has to be the most worrisome trend.

A federal lawsuit was filed on behalf of the National Black Farmers Association calling for the removal of Monsanto’s popular weedkiller Roundup from the market. 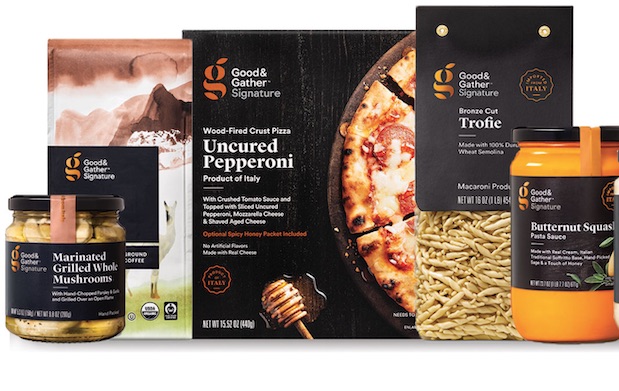 UK Organic Food and Drink Sales Boom During the Pandemic

Bananas, chicken, eggs and wine are the standouts, as growth reaches its highest rate since 2016.

Microplastics in Farm Soils is a Growing Concern

Researchers say that more microplastics pollution is getting into farm soil than oceans.

* Looking to launch your organic brand into the Chinese market?

* If so, please join me and my partners at OrgHive — China’s leading digital marketing platform for the organic industry — for the webinar 3 Things to Know to Win the Organic Market in China. It will be on Tuesday, September 15th at 8pm EST, and registration is free.

* Dr. Bronner’s has launched its Heal Soul! campaign in support of psychedelic-assisted therapy and medicine, and the company has donated over $3 million to psychedelic therapy efforts in 2020.

* On Wednesday, September 16th at 3pm EST, I will be talking about all-things organic on a free webinar presented by Naturally Bay Area, with a short Q/A at the end.

* Congrats to my friend Errol Schweizer, former VP of Grocery at Whole Foods Market, on the launch of The Checkout — his new podcast that highlights issues of food justice, sustainability and food labor.

* Organic Valley has appointed Nicole Rakobitsch as its Director of Sustainability, and Lori Stern has been named the Executive Director of MOSES (Midwest Organic and Sustainable Education Service), which is nationally recognized for hosting the country’s largest annual organic farming conference.

* In honor of Organic Harvest Month, Natural Grocers has launched its “Ladybug Love Your Neighborhoods” partnership With Beyond Pesticides.

* Want to make sure that your organic garden is prepared for the fall and winter seasons? If so, join the gardening experts from StartOrganic on their free webinar — Wednesday, September 23rd at 2pm EST.

* Click here to watch the trailer for Percy, a film based on real events from Percy Schmeiser’s lawsuit against Monsanto after the company’s GMOs landed on his farm.

* Wow! The Clean Label Project is facing a RICO lawsuit, with accusations that the organization’s testing and product grading activities amount to a protection racket.