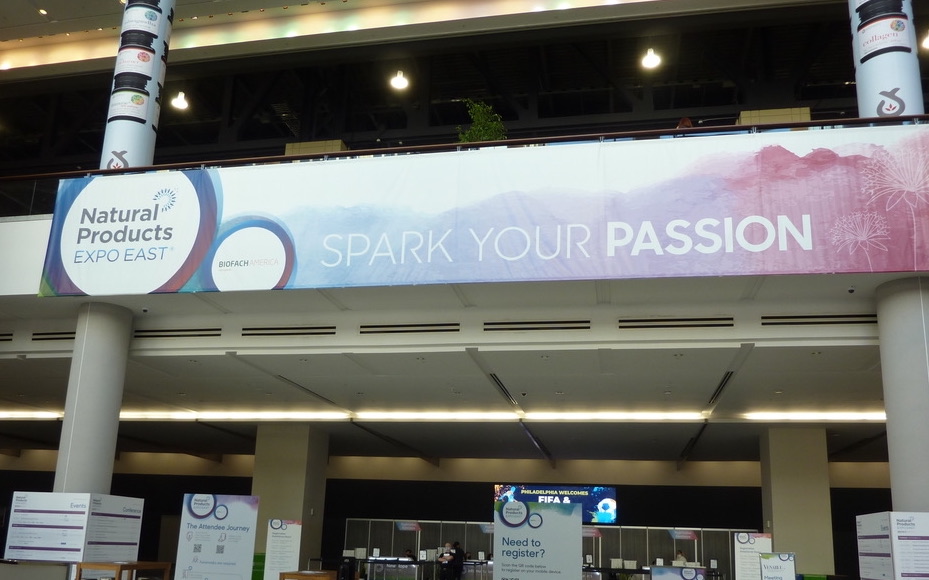 The biggest story of last week’s Natural Products Expo East show was that there was a show.

Behind the scenes over the past six months, ever since Expo West 2021 was canceled, New Hope Network was soaking in every data point that it could, trying to ascertain whether a successful Expo East was, in fact, viable.

“In July, vaccination rates were tapering, and in early August, there was the cancellation of the Fancy Food Show. Both of those things created concern, in addition to the spreading of the Delta variant,” said Carlotta Mast, Senior Vice President at Informa Markets’ New Hope Network. “We saw cancellations at that point and were meeting with the team 3-4x per week. We kept asking whether the buyers would be coming and would the ROI be there.”

“Yet, throughout all of this, our attendee registration was steady and increasing, and we were on track for an event not much smaller than 2019. After looking at all of the covid safety data and being as transparent with the community as possible, including soliciting feedback from everyone, the data showed that we could have a safe show. And I believe that we did have a safe show.”

This year’s Expo East, which garnered approximately 15,000 attendees and 800 exhibitors, required everyone entering the trade show floor to provide proof of vaccination or a negative covid test. Safe sampling and mandatory mask mandates were in place, with 30 safety ambassadors walking the floor.

Was there 100% compliance with the masks? No, but New Hope believed that there was strong compliance — an accurate assessment from my point of view.

With Philadelphia hosting Expo East for the very first time and having the show during covid, a great deal was new for both attendees and exhibitors.

Here were my observations of the show itself.

* In Philadelphia, the entire trade show floor was on one floor in one building, which was fantastic. It definitely made it easier to navigate the hundreds of exhibitors, and there was no traversing different buildings or different floors to see booths.

* A few very noticeable aspects of the show were much wider aisles on the trade show floor, on-floor seating and eating areas, and on-floor sampling stations/food trucks. I loved that the show floor was so spacious and self-contained. 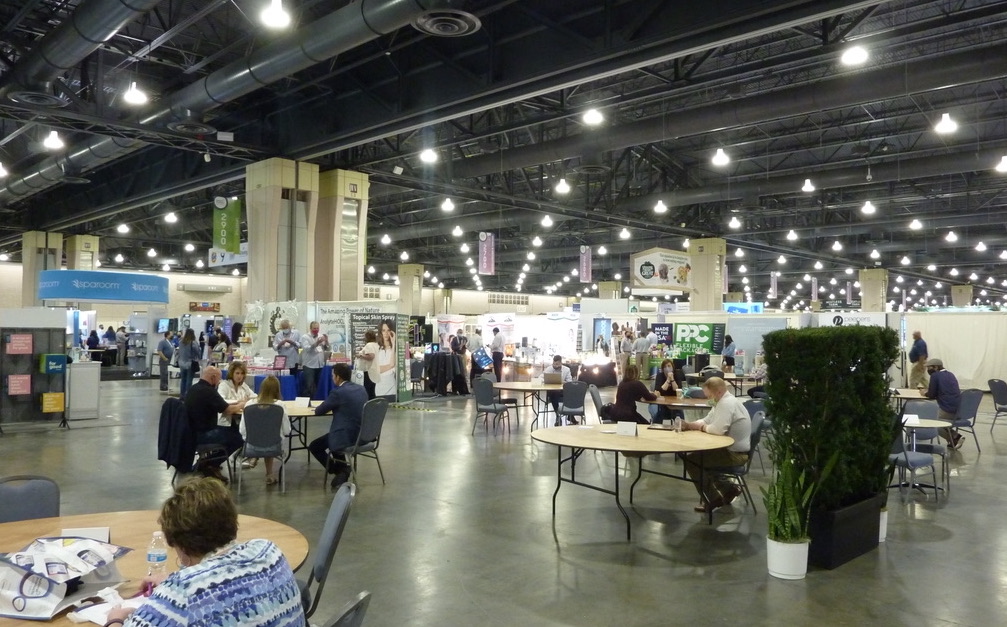 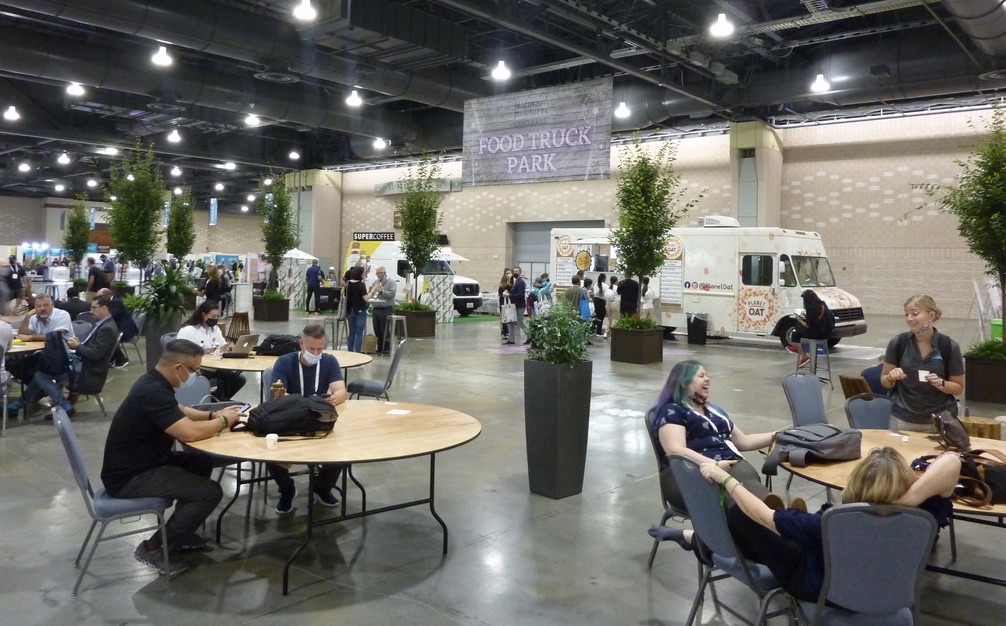 * The Harvest Festival, which had traditionally been hosted outdoors in a covered space, was held indoors. Apparently, there was no outdoor space available.

* No carpeting on the trade show floor. This was done for both covid safety and sustainability reasons. Taking this measure saved 300,354 sq. ft. of carpet, padding and Visqueen. In the past, 76% of the carpet was returned to inventory but even with tremendous recycling and upcycling efforts, the carpet material usage was staggering. Also, by not shipping carpet to and from the show, New Hope saved on carbon emissions from transport.

At first, not having carpeting was jarring, as the show felt much more industrial. But on the second day, I didn’t give it a second thought. Comfortable shoes were an absolute must.

* Because it was the first time at the enormous Pennsylvania Convention Center, navigating the overall show was a bit of a challenge. No one knew where things were, and one couple told me it took them an hour to find the Harvest Festival. With newfound familiarity of the show and New Hope making continued efforts to understand traffic flow and improve signage, I do not expect this to be a problem going forward. 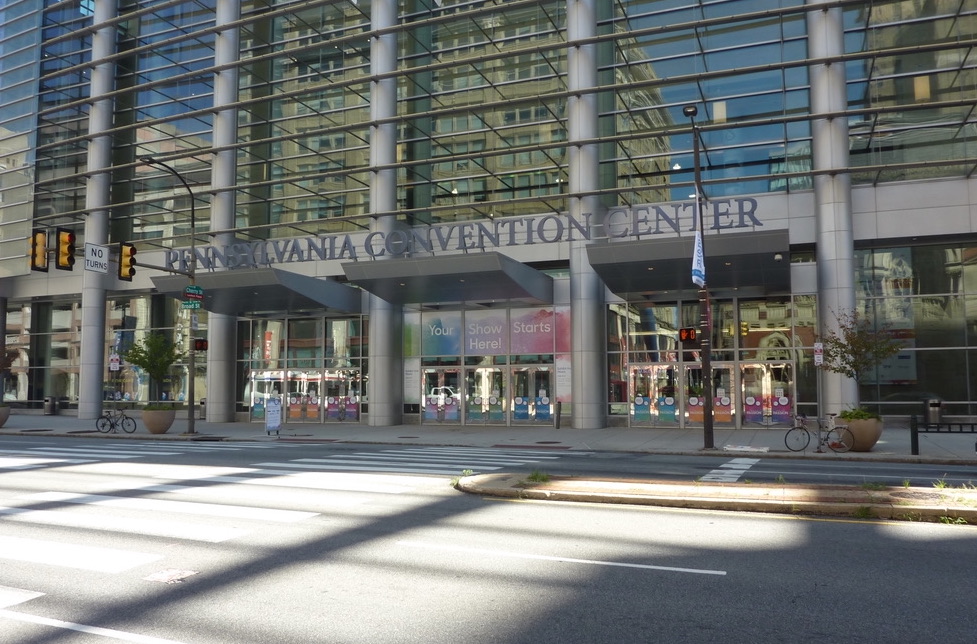 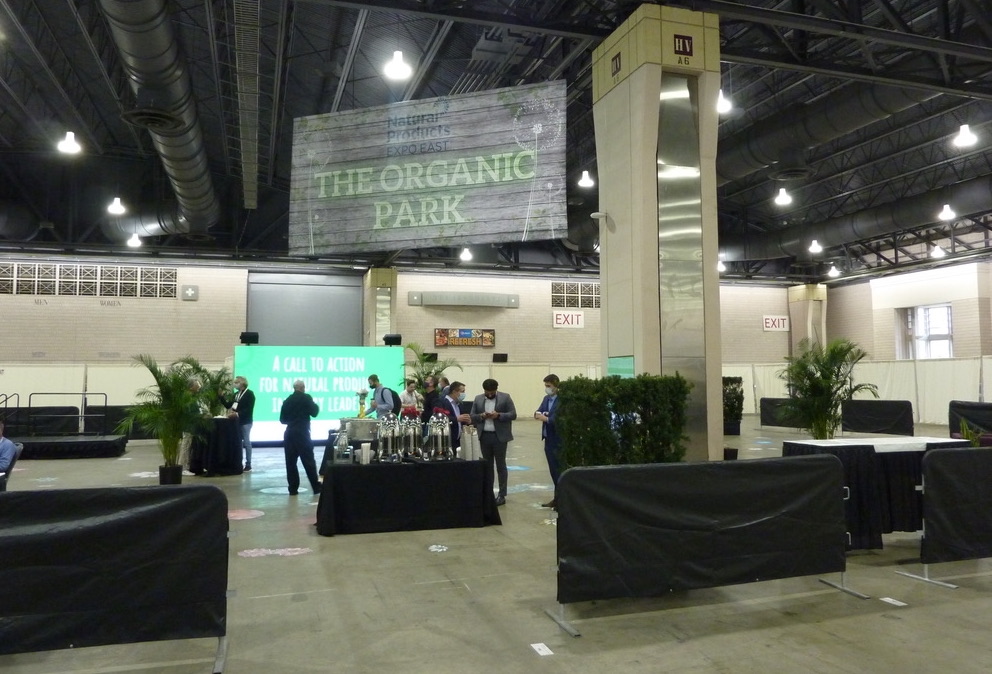 * The Organic Park. This was a new section, carved out on the trade show floor in the Organic Hall. While there was not much happening in the park for this show, New Hope said it wants to fill the space with educational content, including booths from many of the non-profit groups, such as Rodale, Organic Farming Research Foundation and others. This could be an incredibly valuable opportunity for many NGOs to have a physical presence at Expo East for the first time ever. I spoke with New Hope about working with them on content for this area, and we’ll be having conversations in the months to come.

My biggest takeaway from last week’s Expo East was one of tremendous appreciation that we were able to have a show, and it was a sentiment that I routinely heard from attendees and exhibitors. Given the state of the world, it was an important first step back for Natural Product Expos and was about as perfect of a show that we could have had. Without question, it will serve as an impetus for brands and attendees to not miss out on Expo West 2022.

“We needed this event to demonstrate that we could put on a safe, successful trade show, which we saw from the level of attendance and energy, the way the community showed up in a positive way and with grace, the high-quality interactions between buyers, exhibitors and investors, in groups and one-on-one. Shows like this help enable the collective change we want to have as a community, and without them, it is harder to showcase the voices moving us forward and the issues facing our industry. Moreover, in-person connection is vital for humans.”

TOP 5 ORGANIC PRODUCTS OF THE SHOW 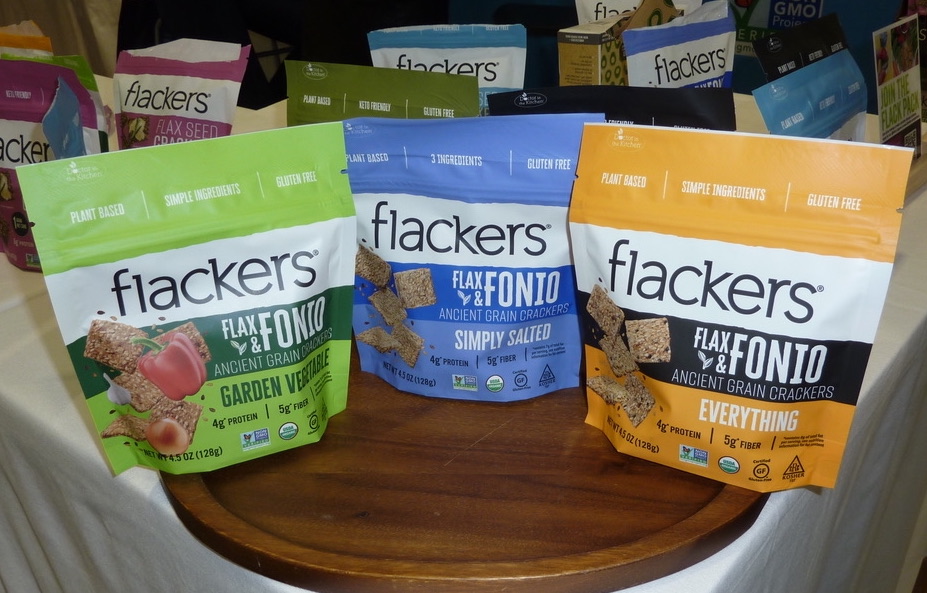 Fonio is an African grain that has been getting a good amount of buzz these past few years, and while I have been hearing about organic fonio from numerous producers, it still remains very hard to find. So, when I saw that Flackers is now offering organic flax seed and fonio crackers, I knew right away that the company had something unique. 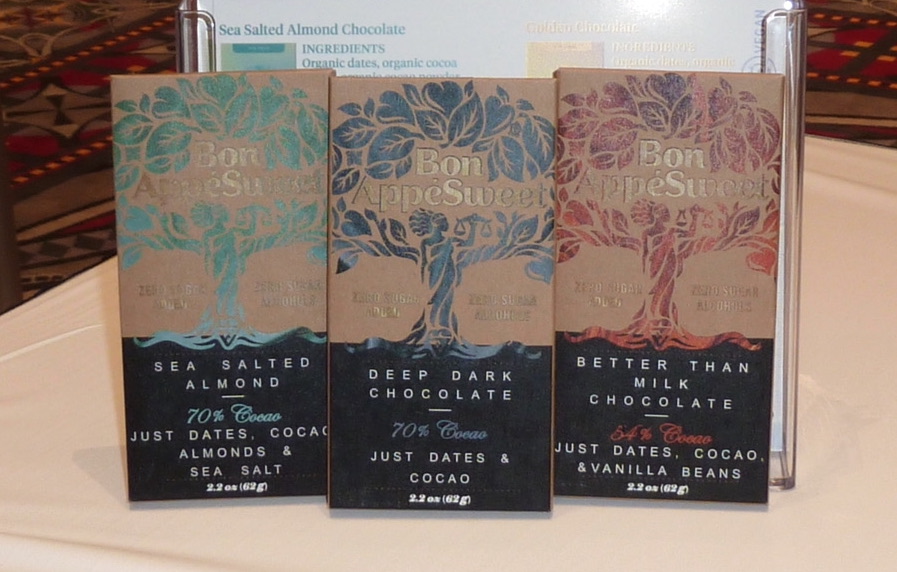 If Bon AppéSweet story doesn’t move you, I am not sure what will — you can watch the video here. The idea of Bon AppéSweet was founded in the broken heart of a deployed mother and active service member, and its chocolate bars make a real statement. They are 100% plant-based and dairy-free, everything is sweetened with dates, and no processed sugars or sugar alcohols are used. All of the ingredients are organic, with USDA organic certification imminent. 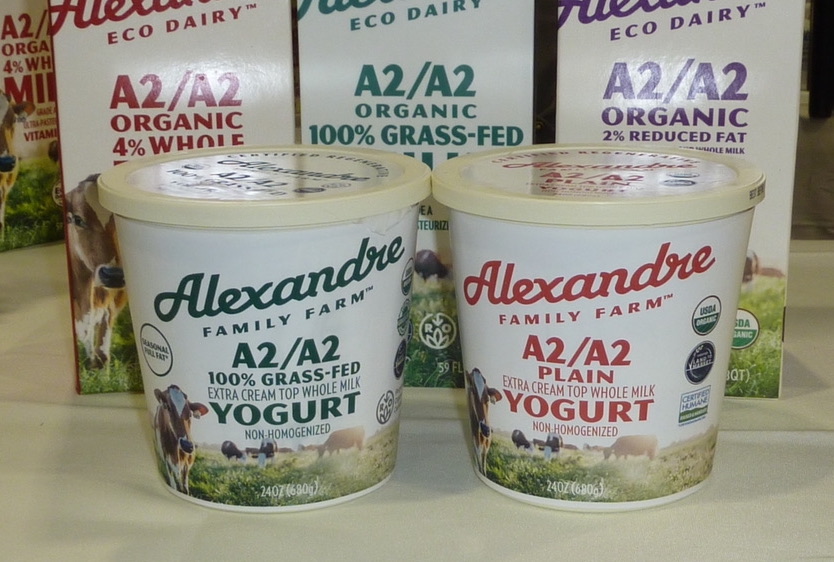 Alexandre Family Farm is really raising the bar when it comes to regenerative organic dairy, and the company introduced A2/A2 Regenerative Organic Certified, 100% grass-fed yogurt — a very novel product. A2 dairy remains one of the best but least understood stories in the industry today. 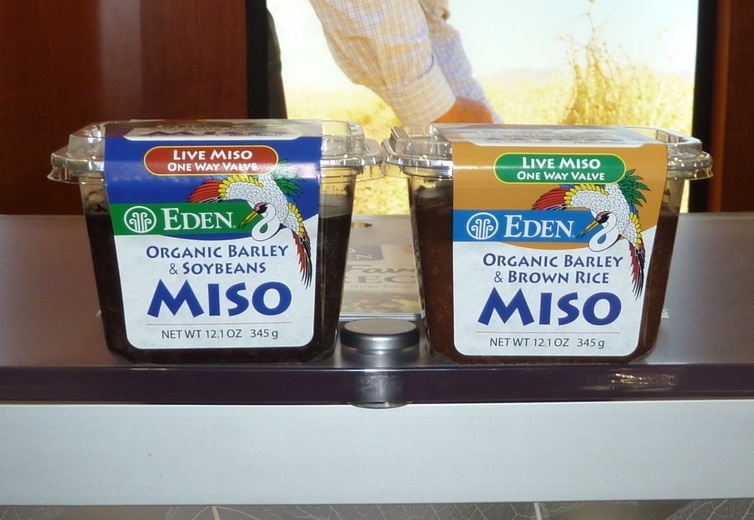 Eden Foods introduced something that I cannot wait to get my hands on — shelf-stable, “live” organic miso. It comes in two varieties — barley & soybeans and barley & brown rice — and the packaging contains a one-way valve that allows fermentation gas to escape while preventing outside contamination. 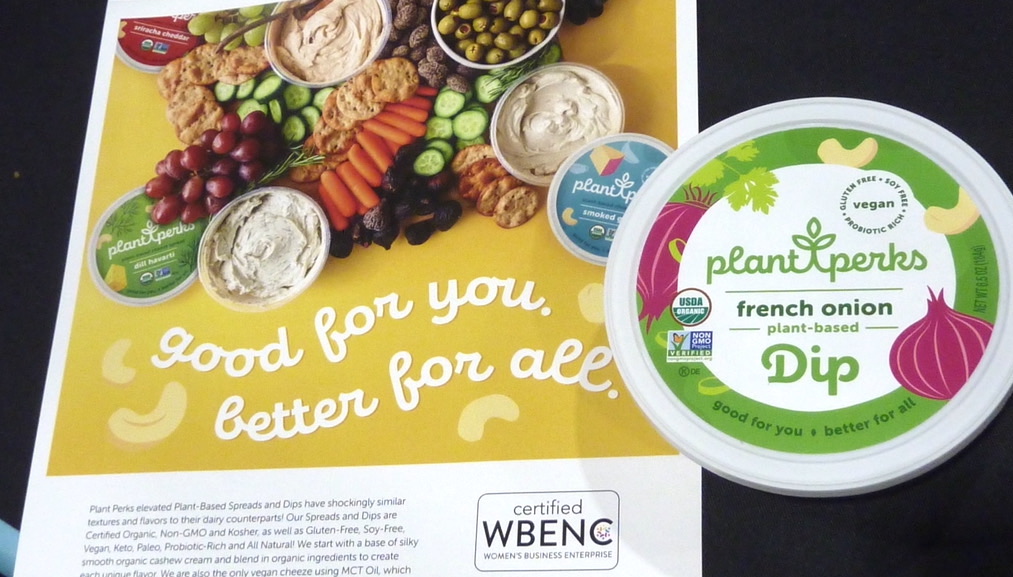 Plant Perks is becoming a regular here, as it also took home my Top 5 of Expo East 2019. The company’s organic French onion dip was the very first thing I tried on Day 1 of the trade show floor, and it made a lasting impression. Plant-based, gluten-free and soy-free. Delicious! 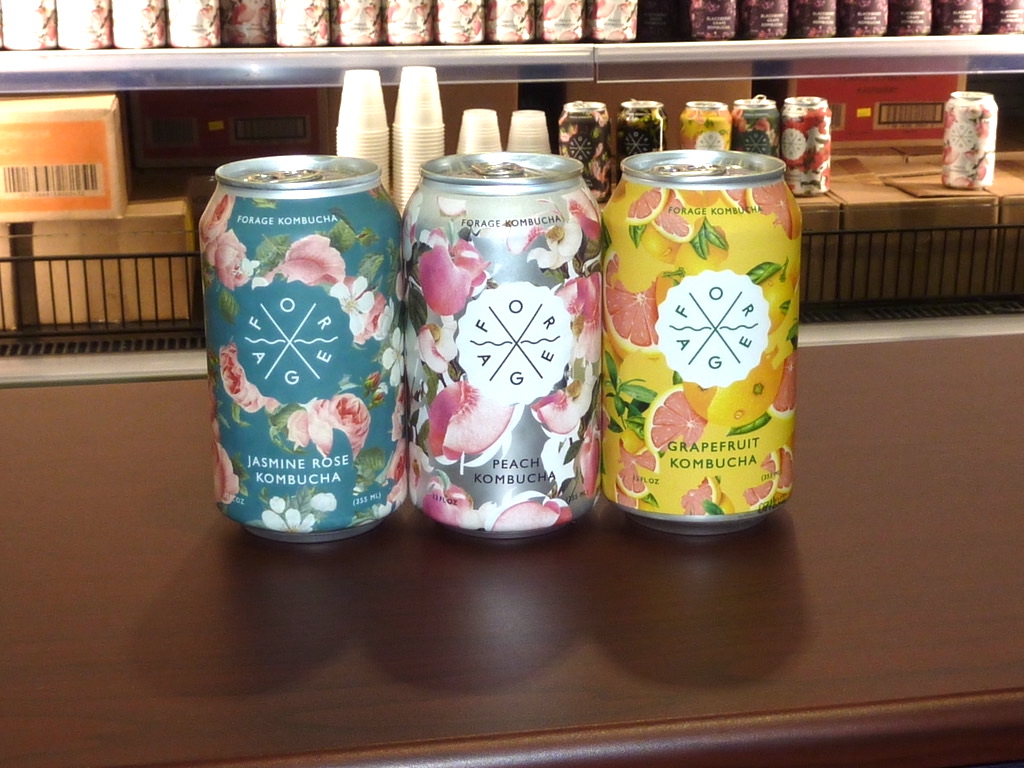 There are many products that have pictures of fruits and vegetables on their label, but I can’t remember anything that is as dazzling and mesmerizing as what Forage Kombucha has put forth. I was at the company’s booth for about ten minutes, and nearly every single person who stopped by commented on the packaging. Sophisticated, stunning, world-class. 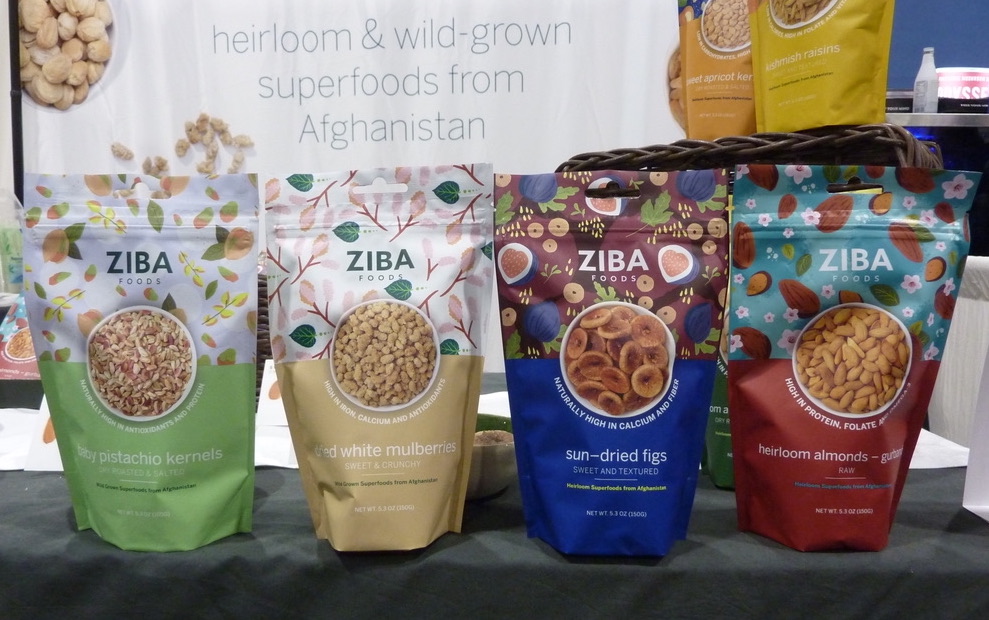 Even with all of the turmoil in Afghanistan, where Ziba Foods grows and packages all of its food, there has been no disturbance in business, fortunately. Just as the company’s story and products are fantastic, so is its packaging. Uplifting, beautiful, elegant, fantastic color schemes. 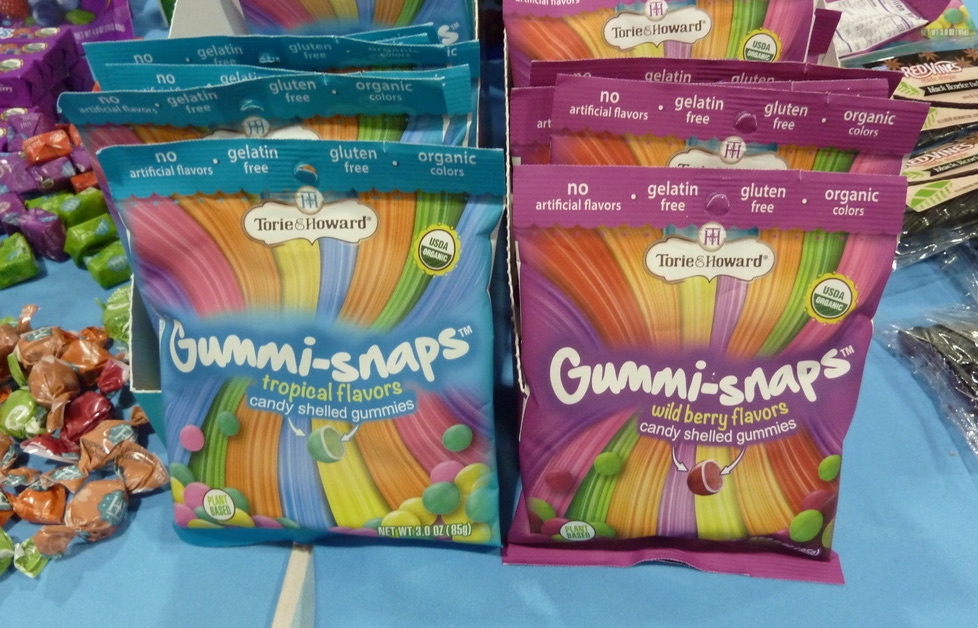 For a candy product, balancing fun and engaging with excellent aesthetics is no easy feat, but Torie & Howard absolutely nailed it with its Gummi-Snaps. Whimsical, unique, incredibly creative and extremely appealing. 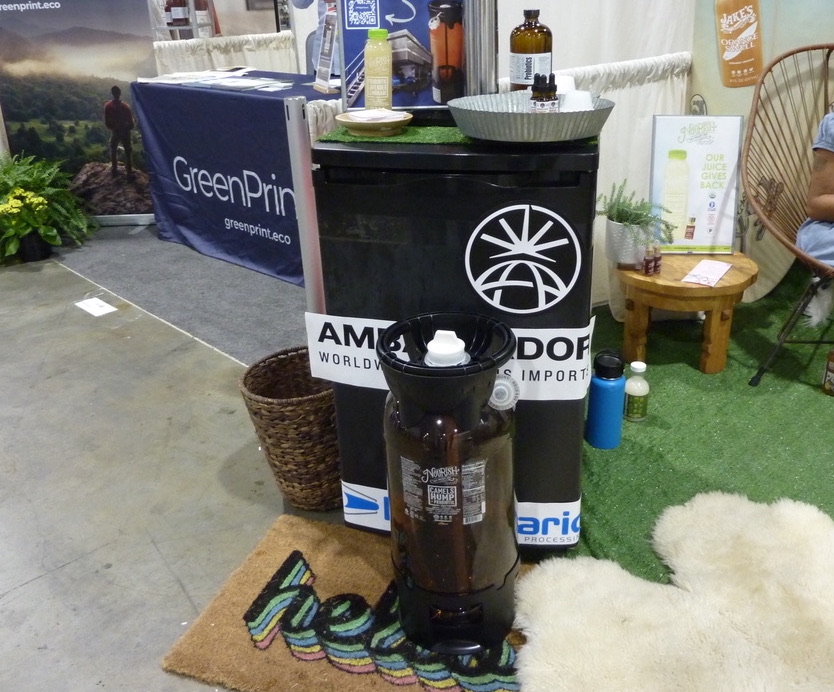 Nourish Juice Bar in Pennsylvania easily took home the prize, as it showed up to Expo East with an HPP keg of cold-pressed organic juice. I have never seen an HPP’d keg of juice before, but this should be on every college campus in the country.

* TIME-SENSITIVE: GMO mosquitos may soon be released in California. The deadline to tell the EPA ‘No’ is tomorrow, September 30th.  Click HERE to help.

* Antibiotics and carcinogens in organics? The National Organic Standards Board may soon allow them.

* David Bronner, Cosmic Engagement Officer (CEO) of Dr. Bronner’s, on Raising the Minimum Wage for All Workers —- with Paid Overtime for Farmworkers.

* The Winter 2022 Fancy Food Show will take place on February 6-8 in Las Vegas, instead of San Francisco.

* Barnana has deepened its commitment to organic farmers by acquiring its Latin American supply and manufacturing partner, Agroapoyo, based in Ecuador.

* The growing attraction of agrihoods.

* On September 24th, the European Parliament, the Council and the Commission celebrated the launch of an annual ‘EU Organic Day’. 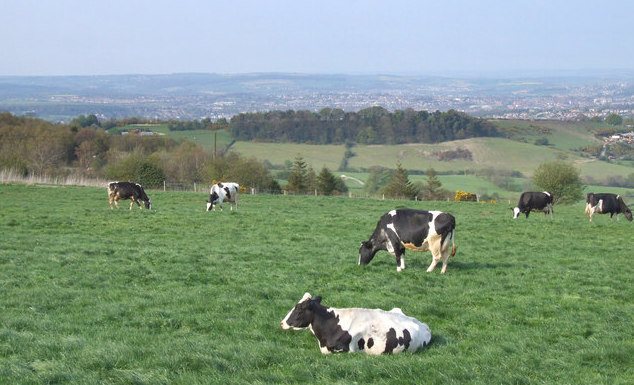 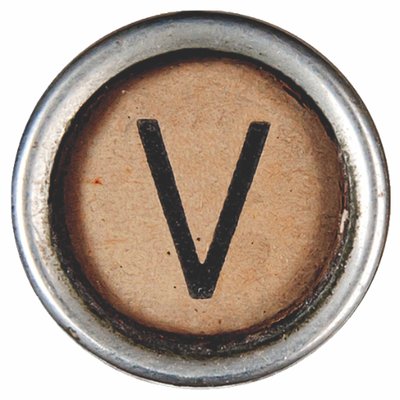 It took Danone terminating the contracts of 89 organic dairy farmers to get the full attention of politicians.

The USDA's National Institute of Food and Agriculture announced an investment of over $30 million for 33 grants that support farmers and ranchers who grow and market high-quality organic food, fiber and other organic products.

A New Reason To Eat Organic: A Diverse Microbiome

Research has shown that the diversity of the bacteria on an organic apple is far greater than on a conventional one. 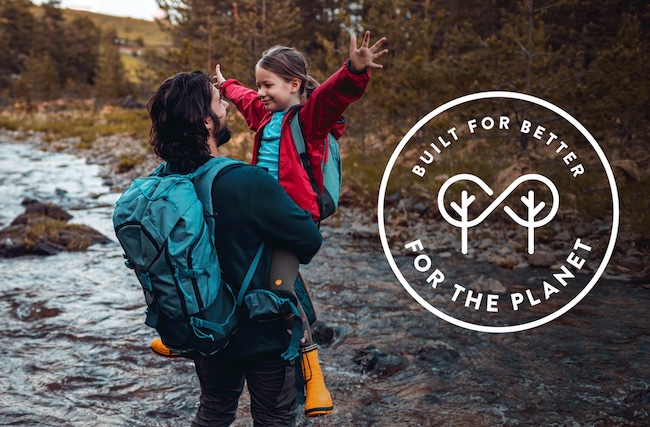 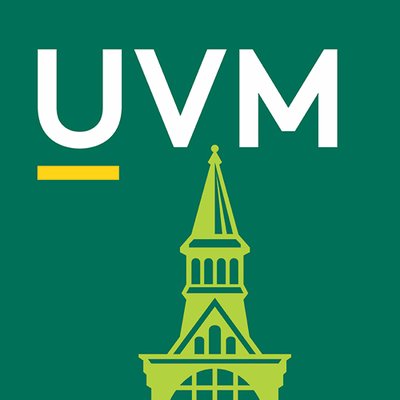 University of Vermont-led research team receives $2.9M from the USDA to explore health, economic and environmental benefits of feeding seaweed to dairy cows. 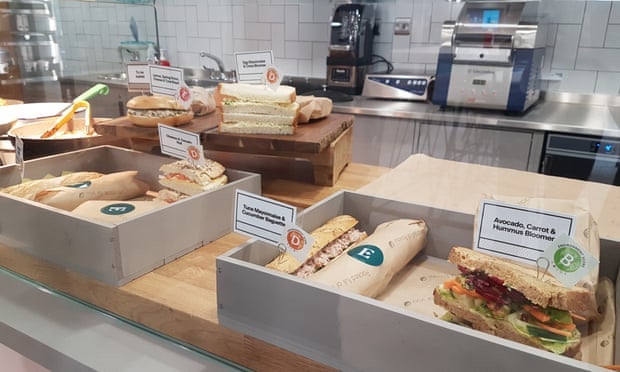 Eco-Labels Can Change the Way We Eat, Study Shows

While food labels are nothing new, a different type that calculates the environmental cost has had a surprising effect on consumers.

Fred Meyer, Walgreens, McDonald’s and Burger King are among the new retailers letting you get food in reusable packaging that you return for reuse.

Animal-based meat and dairy manufacturers increasingly are addressing consumer demand for improved animal welfare and environmental impact – helping to defend and grow their sales in the face of encroaching competition from plant-based options.

* TIME-SENSITIVE: GMO mosquitos may soon be released in California. The deadline to tell the EPA ‘No’ is tomorrow, September 30th.  Click HERE to help.

* Antibiotics and carcinogens in organics? The National Organic Standards Board may soon allow them.

* David Bronner, Cosmic Engagement Officer (CEO) of Dr. Bronner’s, on Raising the Minimum Wage for All Workers —- with Paid Overtime for Farmworkers.

* The Winter 2022 Fancy Food Show will take place on February 6-8 in Las Vegas, instead of San Francisco.

* Barnana has deepened its commitment to organic farmers by acquiring its Latin American supply and manufacturing partner, Agroapoyo, based in Ecuador.

* The growing attraction of agrihoods.

* On September 24th, the European Parliament, the Council and the Commission celebrated the launch of an annual ‘EU Organic Day’.