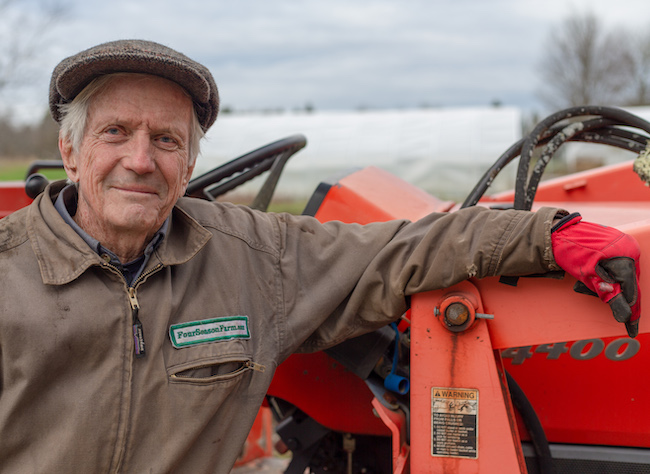 As organic food has exploded in popularity over the past few decades, the organic farming revolution can trace a good deal of its origins to the Maine Organic Farmers and Gardeners Association (MOFGA), which is celebrating 50 years in 2021.

To commemorate this milestone, a fantastic new book was just published called The Organic Farming Revolution: Past, Present, Future. It presents a collection of essays by prominent individuals in MOFGA’s evolution as a leader in the organic movement, as well as important voices in national discussions about sustainability, food resources, soil preservation, young farmers and the intersection of organic farming and human health.

A key contributor to this book is Eliot Coleman — one of the most revered and respected organic farmers in the country and someone who has been involved with organic farming for approximately 55 years.

I spoke with Eliot from his Four Season Farm in Maine about a handful of topics, and below is an edited version of our conversation.

What concerns you the most about organic farming today?

As someone who started with only about two inches of topsoil on our land that we cleared from the forest, I will tell you that I wouldn’t have a farm here if I hadn’t tilled organic matter into that soil for the last half-century.

Today, there is almost this religious embrace of no-till, and I wonder where this all came from. Now, if that hadn’t worked for me for the last 55 years, I would be just as anxious as a lot of these new young farmers who are touting no-till as the savior of the world. But our soil is so unbelievably productive. I don’t think any tillage I’ve ever done — mixing organic matter into the top four inches of the soil — has ever had any negative effect.

So, do you feel that this no-till approach is actually an incorrect one?

No, I suspect there’s a lot of research talking about how there is certain fungal activity in the soil that’s destroyed by tillage. I’m sure much of that research is correct, but I think there are other factors going on.

I’ve gotten some of the books by the new, no-till organic hotshots, and the amount of work these people are doing on the farm is incredible. If I were to duplicate their efforts, I’d have to double my crew. They are carefully spreading shredded leaves down the paths, and some of them are using six inches of compost on the surface of the soil.

I calculated for us to buy that high-quality compost and put down six inches would cost me $180,000 per year. That just doesn’t make sense for my farm.

In my view, there is an inherent problem with the word ‘regenerative.’ When I am trying to explain what we do on our farm, I refer to our techniques as ‘generative.’

If you’re regenerative, this means — and it is true of an awful lot of the large farmers in the Midwest — that the beautiful, deep, fertile soil that you were given by Mother Nature when you started has been ruined or degraded by the techniques you’ve been using. You have degenerated it, and now you need to regenerate it.

On our land several decades ago, we had nothing to begin with, so we have been generating fertility. It has been positive the whole time.

Can you please talk a little bit about your collection of organic-related books?

I am a book nerd and have about 3,000 of them, including some from the 18th century. I’m just fascinated by the ability of a book published, let’s say in 1921, to allow the author to communicate with me in 2021. The quality of thinking and their understanding of the natural world were just exceptional.

The one book that I always point out to people is the 1938 yearbook of the USDA. It was put together by Henry Wallace, who served as secretary of agriculture and eventually became Franklin D. Roosevelt’s vice president. It could be republished today as an organic farming textbook because that’s exactly what they were discussing — green manures, cover crops, crop rotations and mixed farming. They were talking about all the things that were used before chemicals took hold.

When I was just starting out, from 1965 to 1968, there were professors of agriculture at major universities who were claiming that what I was trying to do was impossible. Yet, here was this book from 30 years before, printed by the USDA, saying the exact opposite!

It just shows you the power and influence of the chemical companies and what gets taught to aspiring farmers in ag schools.

If you had a magic wand and could change one thing about the organic industry, what would it be?

It would be to change the way we market and sell organic food to consumers. The aim of agriculture is to grow food. The minute you think the aim of agriculture is to make money, you’ve lost the whole game. Because at that point, you are willing to make decisions to the detriment of growing good food in order to achieve the other goal. This constant race to the bottom to gain market share and to please retailers is having a detrimental impact on organic farmers. But it isn’t just farmers who are suffering. Consumers are getting a nutritionally inferior product, which will make their health worse, not better.

Unfortunately, most people do not understand this, and the organic industry has not explained this well to its customer base. That being said, I believe there are enough people out there that would pay more to have their dollars support organic farmers who are doing things the right way.

* 5 things to know about Lulu, the new Los Angeles restaurant from Alice Waters.

* Dr. Bronner’s has released its 2021 All-One Report, which summarizes the company’s metrics and stories on social justice and environmental efforts in 2020.

* Save Farmland Fund in Montana — we need more of these.

* ‘Farm to Trunk’ Orlando is giving organic produce to people in need.

* What the French are doing to help save the bees.

Behind the Rebrand with Nutiva

Behind the Rebrand with Nutiva 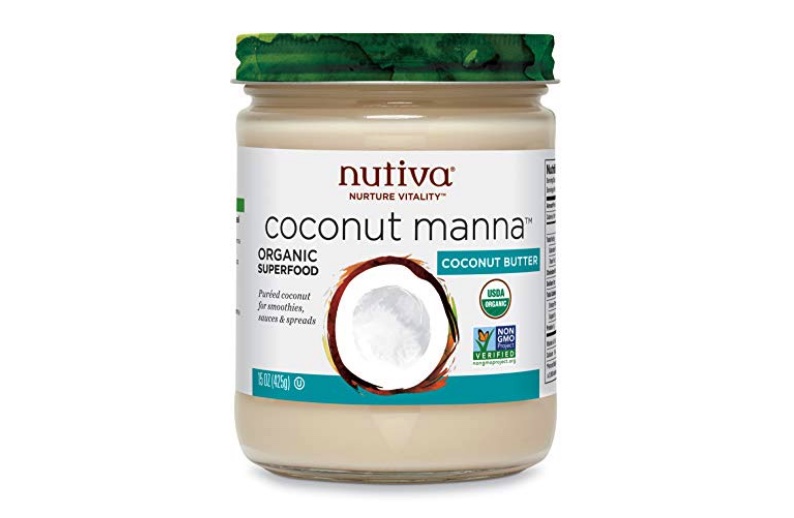 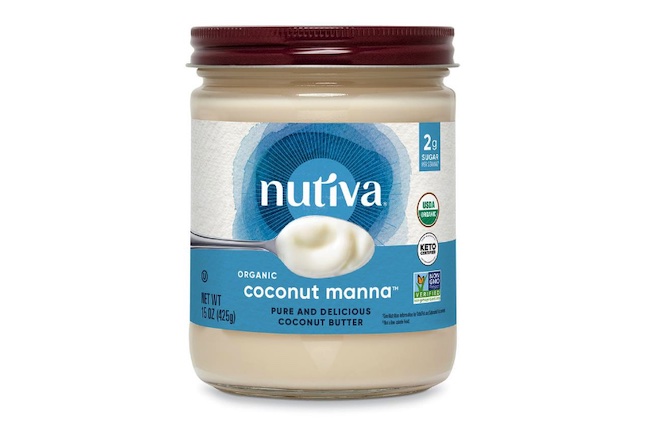 What were you hoping to accomplish with the rebrand?

Our primary goals were (1) to bring our brand’s purpose, vision and values to life in order to better connect with consumers who also prioritize the well-being of themselves, others and the planet (2) to increase brand awareness, trial and loyalty (3) to communicate the quality and efficacy of our products more clearly while highlighting how we are different than our competitors, including organic-based products and sustainably-minded sourcing and supply chains (4) to increase shop-ability across digital and retail environments.

Can you discuss the key visual and verbal elements?

Our bright new logo and packaging brand elements are inspired by the vibrant energy of the sun, with an expressive halo of colors nodding to the range of nourishing products in our portfolio. The new identity is bold and colorful, expressing our belief that a bright future for all is rooted in healthy food.

For verbal elements in the rebrand, we are communicating our brand purpose, sourcing stories and corporate giving program, along with the usage occasions for each product. In addition to the logo, the distinctive color bands on the new packaging and front panel certifications (USDA organic, Fair Trade and Non-GMO) improve shop-ability and emphasize key attributes and differentiators that consumers are looking for.

Defining a new visual identity is difficult because there are often elements of multiple designs you really like. This was the first challenge – honing in on one area that communicates clearly what is most important to your brand.  We engaged consumers in this step, using a virtual shopping tool where people encountered our design concepts in a real-world environment.

The other challenge was adapting a master design to work across a diverse portfolio of products in a way that allows each product line to shine yet also ties the entire portfolio together.

The complaint to B Lab, which oversees the B Corporation certification, outlines the violations Danone has made against the B Corp Declaration of Interdependence.

USDA's New Strategy is Music to the Ears of Bayer, Syngenta and Other Ag-Biotech Giants

USDA Secretary Tom Vilsack’s dismissal of the E.U. Farm to Fork Program is out of step with consumer sentiment, food justice advocacy and the latest cutting-edge research on agroecology.

In a Series D led by Lone Pine Capital, Daily Harvest is now valued at north of $1 billion and will use the funds for regenerative agriculture partnerships and to open The Tasting Room, a physical location in Chicago. 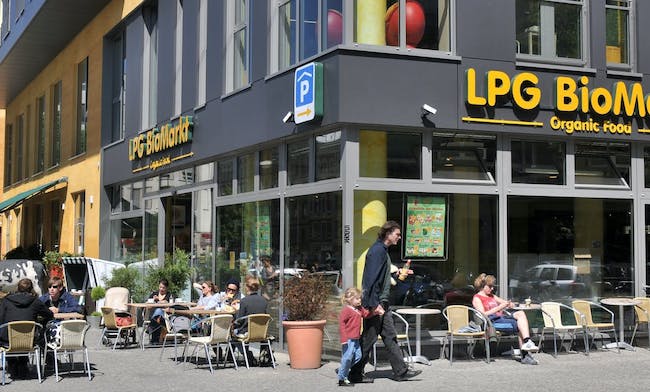 Unlike the U.S., Europe is Setting Ambitious Targets for Producing More Organic Food

Former Deputy Secretary of the USDA Kathleen Merrigan discusses how our country is moving in the wrong direction.

Thrive Market now has more than a million paying members and generates 1/3rd of its sales from 700+ private label products.

Back to the Roots closes $15M Series D

The Series D funding came from S2G Ventures, Loft Growth Partners, Fenwick Brands and Echo Capital, and it will be used to accelerate product innovation and for new distribution growth. 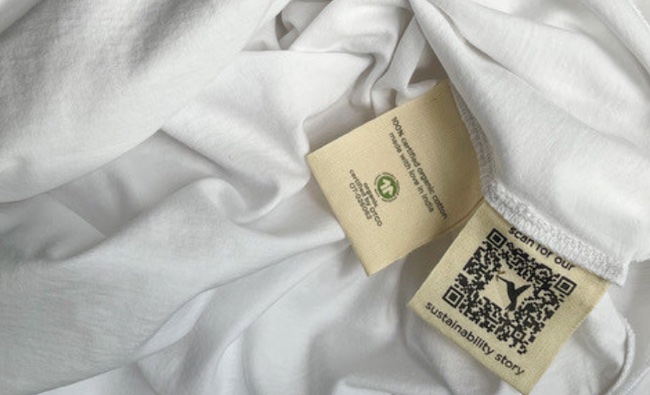 Organic clothing brands YesAnd and SEED TO STYLE will offer customers end-to-end traceability through a scannable QR code on their apparel.

The EPA has finally acknowledged that the endocrine-disrupting pesticide atrazine and cancer-causing pesticide glyphosate are each likely to harm more than 1,000 of the nation’s most endangered plants and animals.

Some of the top trends include healthspan, sensible indulgences, functional flavors and saying goodbye to burnout.

* 5 things to know about Lulu, the new Los Angeles restaurant from Alice Waters.

* Dr. Bronner’s has released its 2021 All-One Report, which summarizes the company’s metrics and stories on social justice and environmental efforts in 2020.

* Save Farmland Fund in Montana — we need more of these.

* ‘Farm to Trunk’ Orlando is giving organic produce to people in need.

* What the French are doing to help save the bees.