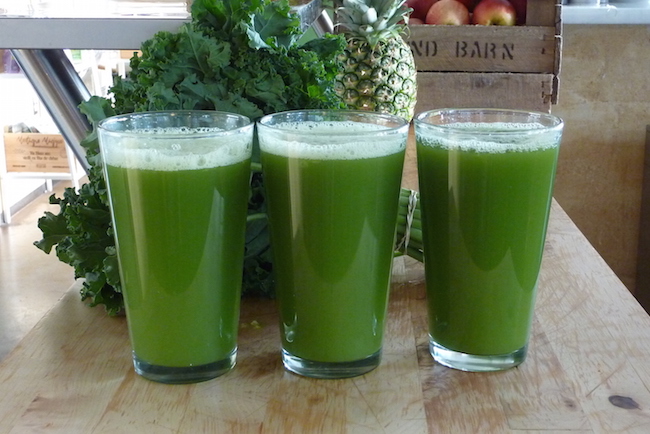 Insiders Give Their Take on the Pressed Organic Juice Industry

Within a very short period of time, pressed juice has become one of the highest-profile categories in the organic sector, largely because many people view it as an essential daily component of their health routine. Additionally, organic juice bars throughout the country are viewed as key influencers, trendsetters, and important sources of wellness information for consumers.

Yet, as the pressed organic juice industry has developed and become more competitive, there are conflicting signals as to where it is heading and whether the demand for pressed juice is still as strong.

On the other hand, leading players such as Suja and Juice Press continue to increase their distribution footprint.

What is also noteworthy is how some companies have become less reliant on juice, having expanded their product offerings. Forager Project has launched very well-received lines of vegetable chips and plant-based yogurt, Project Juice has moved into the frozen smoothie bowl and ingredient business (similar to Daily Harvest), and Urban Remedy just raised $17M to help grow its ready-to-eat organic meal business.

Wanting more clarity about consumer demand and the state of pressed juice, I reached out to a handful of industry insiders to get their take on the situation.

Jeff Church, CEO and Co-Founder of Suja — We’re still seeing solid growth in the juice category, and the demand for organic juice has never been higher than it is today. There is also an increased demand for products that contain lower sugar and ingredients that deliver function, such as probiotics, adaptogens, cayenne pepper, turmeric and mushrooms.

Charlie Wettlaufer, President of Goodnature — Pressed juice is definitely in demand more than ever before, but servings of juice are also getting smaller. Consumers are looking for 8-12 ounce servings.

Marcus Antebi, Founder of Juice Press — The demand for cold-pressed juice is on the rise. As more people discover pressed organic juice, the industry will continue to grow.

Over the last few years, there hasn’t been much of an overall change in consumers’ preferences for cold pressed juice. However, there are seasonal trends that consumers have picked up on. For example, turmeric has surged in popularity due to its powerful health benefits, including boosting immunity and improving memory.

Landon Eckles, CEO of Clean Juice —  We are selling approximately double the amount of smoothies versus juice. That being said, juice sales are certainly steady and there is a demand for them.

On the competitive landscape:

Paul Baudier, Founder of East Coast Copacking — The juice industry is moving away from stand-alone store fronts, and only a select number of players, such as Juice Press and Juice Generation, can keep retail going. Most juice companies are switching over to the distributor route because consumers want to do their shopping in one location.

For both juice bars and those that do not have their own retail, I think it’s going to require creativity. Companies need to evolve and constantly offer new products. Sticking with the same SKUs will only get you so far.

Landon Eckles, CEO of Clean Juice — We believe that the juice industry is going through its adolescence phase, and with this growth comes a period of plateaus and uncertainty. We have full faith in the industry as a whole, but the adaptation of the market — as juice goes from what was once considered an item for a small cult following to something that is more accepted by the masses — will be a bit of a process, with not all concepts able to survive.

Jeff Church, CEO and Co-Founder of Suja — When we first launched, there were 3 brands at Whole Foods Market. Now, there’s over 50 nationally. For a juice company to survive, it really requires them to have the ability to innovate quickly and be flexible and nimble. We’re able to see trends and get a product on shelf within 8 weeks of ideation.

Conversely, if we see that something isn’t working, we are able to pivot and make improvements as we go. Ultimately, we think that’s a huge part of what has made Suja so successful.

John Craven, CEO and Founder of BevNET — In the case of juice retailers, there’s a bigger opportunity to be a healthy food retailer, although I do not think this is an easy path or one that many of these companies can grow into organically. But I like what Juice Press and Urban Remedy are both doing on this front.

Marcus Antebi, Founder of Juice Press — Brands that consumers can trust are the ones that rise above the competition. In comparison to other food industries, I don’t think juice businesses are as competitive as people may think. Over the last few years, the leaders have emerged and many companies have faded away.

Charlie Wettlaufer, President of Goodnature — The brick and mortar juice shop is a tough business. There was a huge rush to open cold-pressed juice brands in 2014 and 2015, and we are starting to see many of those brands close their doors as some other brands are consolidating. Juice shops opening in new markets (Middle America or overseas) are still doing well, as there is a demand in places that don’t yet have access to good, organic juice.

In order to survive in the more competitive markets, brands are diversifying into both wholesale juice and other health and wellness products. A great example of this is Moon Juice with their line of powders (dusts) and superfoods.

On how major retailers, such as Whole Foods and Kroger, view the category:

Jeff Church, CEO and Co-Founder of Suja — Retailers know that the cold-pressed juice shopper is a valuable consumer that has the potential to spend more in their store if the functional products that they’re looking for are available.

Over the past couple of years, the ultra-premium juice category saw explosive growth and huge numbers. We quickly began to see a lot of proliferation within the category but in response, retailers are now employing a “good, better, best” strategy to have fewer brands being represented in the space. Retailers are prioritizing the brands that deliver functional products in response to the increase in consumer demand.

John Craven, CEO and Founder of BevNET — Retailers are generally dedicating less space to it and appear to be less willing to work with upstart brands. They also appear to be searching for brands that are lower in price. 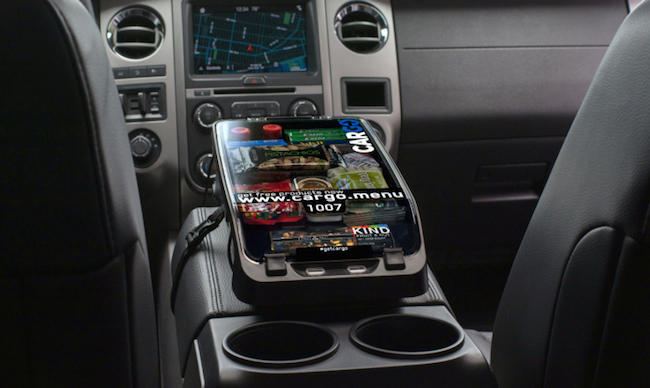 Organic Will be in Big Demand by Gen Z

A new study has said that Gen Z is emerging as an influencer in grocery spending and that it will favor organic, better-for-you options, and multicultural offerings.

Legend Organic Farms, a division of Nature's Path, has purchased 5,000 acres of farmland in Canada and intends to transition it to organic.

Simple Truth, the natural and organic brand from Kroger, has reached $2 billion in sales.

What was once non-existent, there are now 256 sustainable farming programs, 97 of those leading to bachelor’s, master’s, and doctoral degrees, across the U.S. 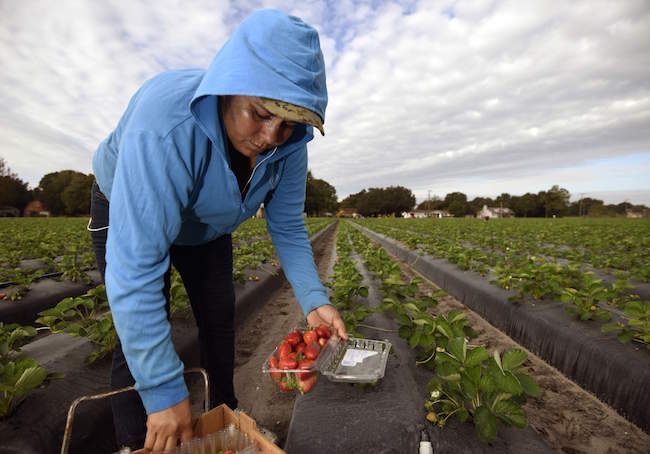 The Need for a Regenerative Organic Standard

Dr. Bronner's give us a good overview of the upcoming Regenerative Organic Certification and why there is a need for it.

Dr. Don Huber, Professor Emeritus of Plant Pathology at Purdue University and one of the leading experts in the world on glyphosate, discusses how this toxic chemical bioaccumulates in the brain, bone marrow and other organs, and how it wreaks havoc on human health. 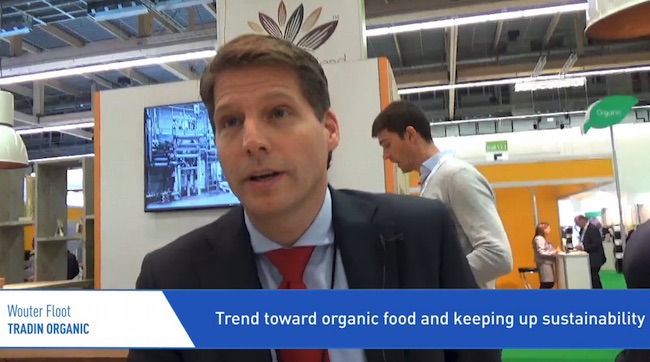 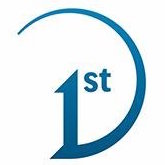 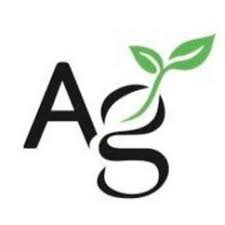 Miyoko Schinner, founder of the organic, plant-based cheese and butter company, discusses fulfilling her mission and not living in fear.

Sun Basket, a meal kit delivery service which uses organic and sustainable ingredients, has just raised $58 million from August Capital and others.

* John Foraker, CEO and Co-Founder of Once Upon a Farm, has drafted a letter to the natural and organic industry seeking its support for the Dreamers.

* There are rumors of Alibaba doing some type of deal with Kroger, and Boxed being wooed by both Amazon and Kroger.

* Plenty of New York City-related news to share with you.

* On Sunday from 10am to 6pm, the Institute for Culinary Education will be hosting a one-day chocolate symposium called Roots of Cacao.

* On Monday night at 6:30pm, Alexis Baden-Mayer, Political Director of the Organic Consumers Association, will be speaking about carbon farming, gardening and food justice at the NYC Grassroots Alliance.

* The trend of organic and farm-to-table restaurants purchasing their own farms continues to grow.

* Lastly, it is with a very heavy heart to share the news that my friend and Toronto-based organic food entrepreneur Michelle Kopman passed away on Monday.

* I first met Michelle at Natural Products Expo West 2013 and ended up naming her RawFoodz salad dressings as one of the top 5 products of the show. More importantly, we became friends ever since that expo and would have dinner whenever she would come to visit New York City.

* Michelle was an incredibly kind, warm, compassionate, driven and beautiful person. She will be dearly missed. 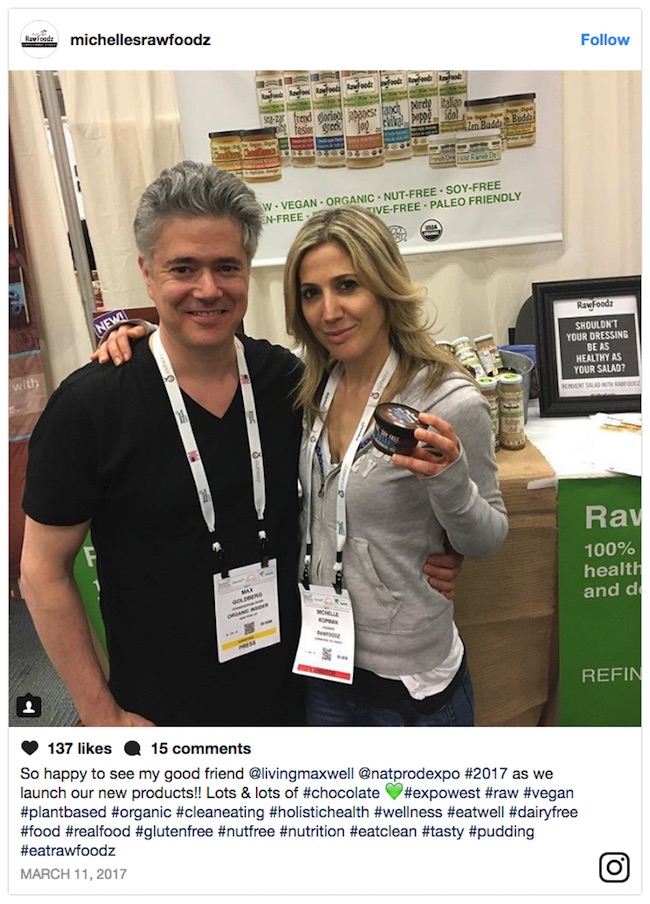