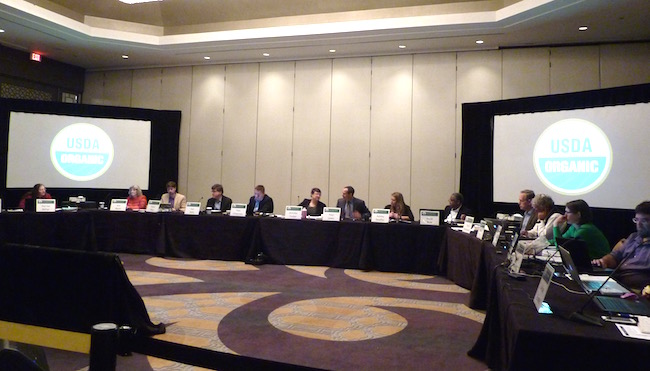 Maintaining the Integrity of Organic Means Little to the USDA

For those of us who care deeply about the organic seal, last week’s National Organic Standards Board (NOSB) meeting in Jacksonville, Florida was a sobering few days.

Jesse Buie, an organic farmer and one of the 15 members on the NOSB, summed it up best when he said “The National Organic Program (NOP) has not enforced the regulations. It must enforce the regulations.”

Earlier this year, The Washington Post found that 36 million pounds of organic grains from abroad were fraudulent.

Even though the Cornucopia Institute and others have been pounding the table about fraudulent organic grains for years, The Post’s story finally got the attention of politicians in Washington, D.C., and action is now being taken.

However, some experts believe that the remedies being proposed to fix the problem may be far from adequate and tighter controls will not be in place fast enough to keep legitimate U.S.-based grain farmers from going out of business.

The newspaper also published a year-long investigation, which included numerous site visits, aerial photos and nutritional analyses of its organic milk, and concluded that Aurora Dairy — the major supplier of organic milk in the U.S. and called by some in the industry as a Factory Organic Farm — may be in serious violation of organic standards. As was discovered in the investigation, Aurora’s organic certifier visited the dairy after the grazing season was over, thereby making it impossible to know whether the company was truly in compliance with organic grazing rules.

At last week’s NOSB meeting when board member Francis Thicke asked NOP Associate Deputy Administrator Jennifer Tucker for an explanation about the decision to close the case on Aurora, she completely dismissed his concern and tersely responded that “Aurora is in compliance.”

As Francis Thicke later disclosed in his final remarks, the USDA investigated this matter by making an appointment in advance to visit Aurora, giving the company ample time to get its cows out to pasture, instead of showing up unannounced to get an accurate picture of what is actually taking place at the operation.

Additionally, the NOSB, which has faced immense lobbying pressure from the two major hydroponic operators in the industry, voted 8-7 in favor of continuing to allow hydroponic in organic (plants grown in water). As disappointing as this vote was, 10 votes were needed to make the change.

The board also voted to allow aquaponics (fish waste added to the water) and container growing systems (plants grown in peat moss, coconut fiber or mulch) to remain in organic but decided that aeroponics (plants’ roots hang in the air, misted with liquid nutrients) would no longer be allowed.

Section 6513 b-1 of the Organic Foods Production Act of 1990, which was ratified by Congress, says that:

As such, hydroponics, aquaponics and all container systems are a complete violation of organic standards.

Yet, instead of interpreting OFPA, many NOSB members seemed to vote based on what they would like organic to be in today’s day and age, regardless of what the regulations clearly say. NOSB members A-dae Romero-Briones and Sue Baird said organic should be “inclusive” and that we shouldn’t exclude people who want to be a part of it.

Despite the efforts of dozens of organic, soil-based farmers who flew to Jacksonville from all over the country to participate in the Keep the Soil in Organic rally and to publicly testify in front of the NOSB, their words fell on completely deaf ears.

With the NOSB meetings having concluded, two primary concerns remain:

1) Given that hydroponics will be continued to be allowed in organic and that this is going to force more organic, soil-based farmers out of business, now what?

Unfortunately, there is no clear and easy answer.

Legal action has been discussed, but that could take many years and there is no strong assurance that we will win. In the meantime, the hydroponic organic industry will have grown much bigger and stronger.

I believe that some type of voluntary “Grown in Soil” label will need to be added to soil-based, organic fruits and vegetables. Taking action to educate consumers about hydroponics in organic will require both a top-down and bottoms-up strategy, driven by efforts from retailers, producers, non-profit groups and media influencers.

2) Where do things stand with the integrity of the organic seal?

The lack of transparency with how Aurora was handled is alarming. Fraudulent imported grains from abroad is by no means rectified and will continue to be a problem. Continuing to allow hydroponics and other container growing systems in organic is a clear violation of OFPA, which may cause many soil-based farmers to abandon organic in protest.

With all three of these situations, the USDA is complicit in allowing the integrity of the organic seal to be harmed.

The only way to assure that the organic brand is not further damaged is to have leading CEOs in the industry come together and descend on Washington, D.C. to fight for transparency and enforcement of organic rules.

And this lobbying effort is not something that cannot be outsourced to the Organic Trade Association (OTA). The OTA is too conflicted.

Dave Chapman, an organic tomato farmer at Long Wind Farm in Vermont who helped organize the Keep the Soil in Organic rally, said “The NOSB did incalculable damage to the seal. It’s just going to take them a while to realize it.” 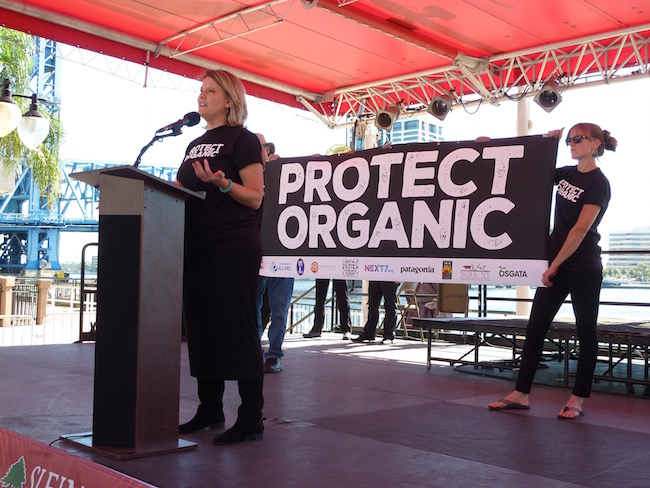 Lisa Stokke, Founder and Executive Director of Next7 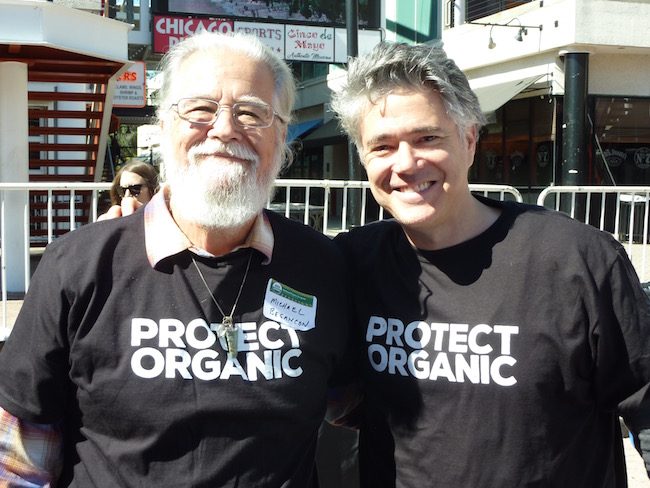 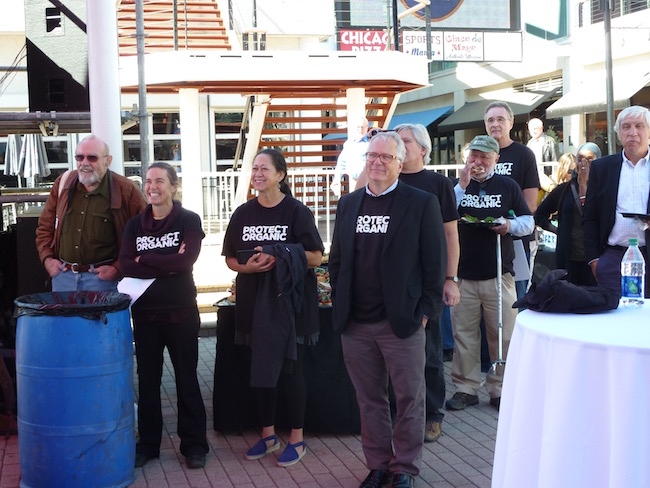 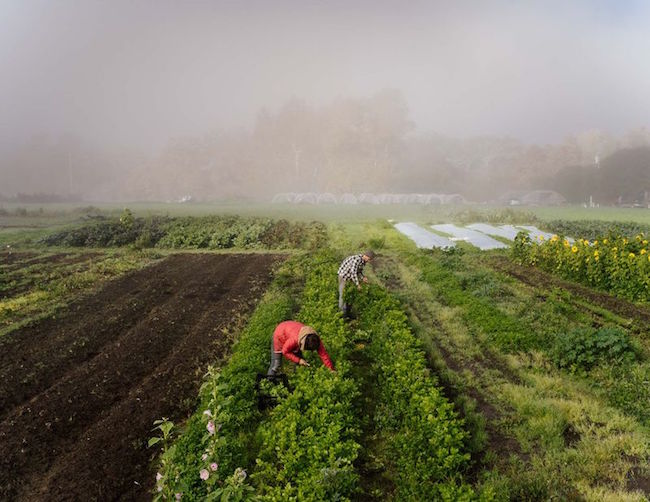 Some organic farmers are already seeing price decreases in their crops and an unwillingness of buyers to enter into long-term contracts.

Floral flavors and super powders top the list of Whole Foods' trends for 2018.

No other Big Food CEO "gets it" more than Campbell's Denise Morrison, whose organic food portfolio is among the top 10 in sales and is growing by double digits.

For those of us who care about food, Vanity Fair's profile of Trump's USDA is incredibly unsettling. 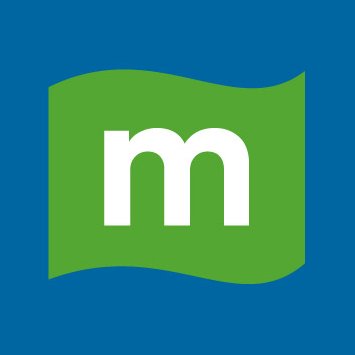 Seeking to expand the ingredient supply for its supplement brand Nutrilite, Amway is scaling up organic farming in India. 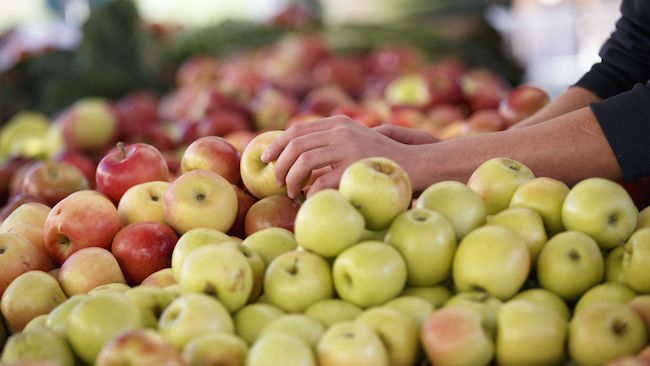 Non-Browning, GMO Apples are Hitting Stores in the Midwest

Sold in slices in 10-ounce bags, GMO-apples that don't brown are about to hit 400 grocery stores in the Midwest.

Nutiva founder John Roulac makes the case that Oxford's financial relationship with Monsanto may be the reason that this study was published.

MegaFood has become the first supplement company in the world to receive Glyphosate Residue-Free certification. 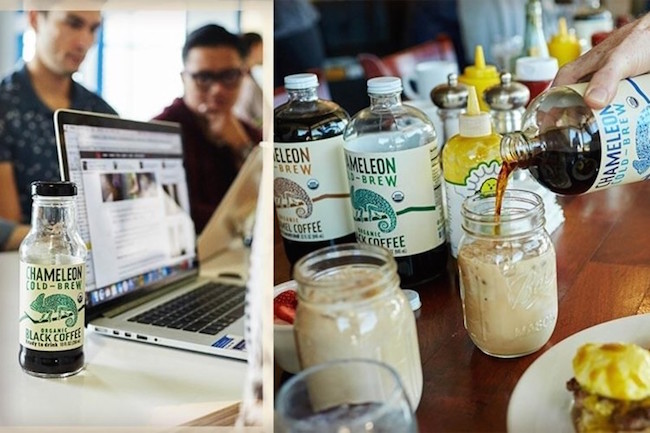 Having sold his company to sell to Nestle, CEO Chris Campbell says the company is now in a position to pursue "wild ideas" to expand the coffee category.

Vital Proteins, the leading producer of collagen peptides, closed on a $19m round of financing from CAVU Venture Partners.

After purchasing Pukka in the UK, Unilever has expanded its tea portfolio even further with the acquisition of Tazo in the U.S.

* Plenty of organic restaurant news to share with you this week.

* In downtown Boston at the former site of Anthony’s Pier 4, Farmageddon producer/director Kristin Canty will be opening a second outpost of her farm-to-table, organic restaurant Woods Hill Table.

* Some legal drama has hit the pressed organic juice world.

* Los Angeles-based Kreation Juice is facing a class action lawsuit from several of its employees over labor violations and failure to pay overtime.

* Meanwhile, San Francisco-based Project Forager is facing a class action lawsuit for failing to disclose that its cold-pressed juice is made via HPP (high pressured processing). Lawyers have characterized the lawsuit as “ridiculous” and the claims a “stretch.”

* Some good news about the bees. Although the bee population is far from being out of trouble, the USDA reported that the number of commercial U.S. honey bee colonies was 2.89 million as of April 1, which was 3% more than during the same time period in 2016.

* Lastly, congrats to my very dear friend and mentor Michael Besancon, a true pioneer in the natural products industry, who retired in 2012 as the senior global vice-president of purchasing, distribution and communications at Whole Foods Market.

* Michael will be awarded an Honorary Doctorate at EARTH University in Costa Rica, and if it weren’t for his tireless efforts over the years, this amazing institution would simply not be where it is today.